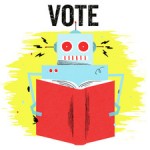 NPR is back with their continuing search for the top 100 Science Fiction and Fantasy books of all time. Or, at least the list as NPR listeners see it from the vantage point of the summer of 2011.

NPR provided listeners the opportunity to nominate titles and complete series for the top 100 earlier this summer. Yours truly provided the results of her agonized selection in this post.

After what appears to have been much deliberation, and the considered input of the expert panel of John Clute (coauthor of The Encyclopedia of Science Fiction and The Encyclopedia of Fantasy), Farah Mendlesohn (coeditor of The Cambridge Companion to Science Fiction) and Gary K. Wolfe (science fiction critic and longtime reviewer for the science fiction and fantasy magazine Locus), NPR collated several thousand inputs into a list of approximately 200 titles.

Now, NPR wants your vote. Really, they want 10 of your votes. Each time you input, you can vote for your 10 favorites that have made the list. (I almost said it was a Chicago election, but you can’t vote for the same book 10 times on the same pass. You’d have to come back 10 times for that. But you could…)

The list is eclectic. And it shows that we science fiction and fantasy readers are a diverse bunch of folks. But one thing it does not show is that we have forgotten that the current writers stand on the shoulders of giants. The classics are there, and in amazing variety and number. Conan the Barbarian and Frankenstein coexist with Jonathan Strange & Mr. Norrell. There is a certain irony to seeing Lev Grossman’s The Magicians on the list, when the work it is derived from, C.S. Lewis’ Narnia, was ruled ineligible as children’s literature.

I recognize everything, and I’ve read almost half. I’m not sure whether to be proud or appalled. Whether I agree with things being on the list is an entirely different question. And some, well, I think they’re marvelous books, I’m just not sure they fit the definition of either science fiction or fantasy. What is Outlander doing on this list? I loved it, but there was way more romance than there was time-travel.

So I had to vote on which 10 were my absolute favorites. That was a lot harder than one might think. For one thing, the creators of the list did not include Terry Pratchett’s Discworld as a single entity. Whose idea was that, anyway? The series as a whole is fantastic, but trying to decide which one of the few nominated is one of the 10 best, I couldn’t do it. AAARRRGGGHHH!

All my other favorites made the list, so that was easy. And voting for The Lord of the Rings was probably a no-brainer for a lot of people. Me, I lost count of how many times I re-read it after the first 25.

The list is in alphabetical order, so American Gods was in the first screen. So was its sequel, Anansi Boys, but I didn’t take the two-fer. Anansi Boys was fun, but didn’t tie me up in knots the way Gods did.

I am proud to say that I now have a friend hooked on the Old Man’s War series, proving to me that this one is as good as I remember. Meeting John Scalzi at the American Library Conference in June and getting a signed copy of Zoe’s War was just a bonus. 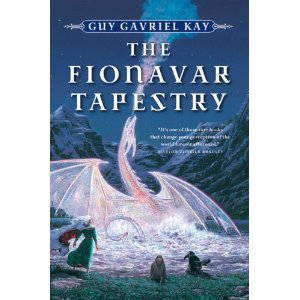 Recently, I thumbed my copy of Tigana again. The ending still wrings me out. But I love Kay’s writing so much that I not only voted for Tigana, when I saw the Fionavar Tapestry on the list, I voted for it, too. That was when I first discovered his writing, and that I have re-read, at least three times. There are parts that are almost as gut-wrenching, but not quite.

Seeing the entire list of titles makes things both easier, and more difficult. On the one hand, it’s a tremendous nostalgia trip. I wanted to read, or re-read, every single book I saw. Let’s just say there were a lot of old friends on that list. Of all the ones I knew, it was incredibly difficult to pick just 10.