There are a lot of myths where a virgin sacrifice (always female) is necessary to tame some monster or other. Occasionally, the sacrifice is bait for the monster, so that the intrepid hero can slay the “dreadful beast”. If the sacrifice survives, she’s either a pariah or forced to wed the beast-slayer, whether she wants to or not. She’s his reward.

The Battle Sylph from L.J. McDonald turns the entire trope on its head, and in this story, throws the entire female-subjugating society that produces it for a loop as well.

Solie runs away from home. Her merchant father is going to marry her off to one of his friends, a fat old man three times her own age who has been leering at her ever since she grew breasts. Solie’s plan is to run to her aunt in the next village, five miles away. Instead, she is captured by the king’s men.

The kingdom of Eferem, and all the lands around it, use creatures called sylphs to perform all kinds of magic. Elemental sylphs control wind, water, fire and earth. Healer sylphs cure diseases and injuries that would otherwise be untreatable. These sylphs are lured from their world to Solie’s by priestly incantations that open a portal between the worlds, and presenting the sylph with something that they like, such as music for air sylphs, or a really interesting injury for a healer. Once the sylph crosses the portal, the they are summoned for gives them a name, and then they are bound to each other for the life of the summoner.

Battle sylphs are different. To summon a battler requires a human sacrifice: the aforementioned female virgin. Then they can be bound, but only by a strong warrior. And the battler will spend his time on this side of the portal projecting hate at everyone who is near him. But one battler is the equivalent of whole armies in combat.

Solie is supposed to be the sacrifice for the son of King Alcor. But the prince was a weakling, and Solie had a surprise up her sleeve. Or rather, in her hair. Her barrette contained a tiny knife, and with that knife she cut the ropes binding her. When the battle sylph was summoned, she stabbed the prince in the arm. She didn’t kill him, but she proved herself stronger, and the battler bonded himself to her. She named him “Heyou” because she stuttered “Hey You” when he faced her, but it was enough. Heyou killed everyone in the summoning chamber to protect her.

In their escape, Solie and Heyou gathered a motley group of followers. The first was Devon Chole, the master of an air sylph, who refused to watch as the king’s men attempted to cut Solie down in cold blood while Heyou fought another battler. Then Garrett, an older man who rescued the wounded Heyou after the fight. And finally an entire valley of desperately poor refugees just trying to carve out a life separate from any of the surrounding kingdoms.

Solie’s escape from her father challenged his authority. Her bonding to Heyou challenged the King’s authority. Even worse, Solie’s position as the master of a battler, for that matter, her position as the master of any sylph, challenges the entire male-dominated structure of her society. And every move that she and Heyou make, every ally they secure, continues to chip away at the authoritarian structures everyone around her believes are solid. But nothing is solid, because it is all built on the loyalty of the sylphs to their masters. Solie’s story represents change, and an awful lot of people don’t like change.

On the other hand, conflicts and change make for great storytelling. There were parts of this story that I liked a lot. Solie is a very interesting character, because she has to both grow up, and also grow as a result of the role she is thrust into. Her journey from merchant’s mostly ignored daughter to valley leader is well done. She’s someone I’d like to meet. The battlers are more difficult, because of their nature. They are strong warriors, but they have a built-in compulsion to obey their masters, even if they hate them. It makes for a lot of perfect warriors with Stockholm Syndrome. Also, Heyou doesn’t grow up, but that may be because his lifespan is longer than Solie’s. He looks like an adult, but he isn’t. The true villain of the piece is King Alcor, and he was a little too one-dimensional, as were his underlings.

But on the whole, this was a good read. More than good enough that I picked up the second (The Shattered Sylph) and third (Queen of the Sylphs) books in the series.

Stacking the Shelves (106)
SEAL of My Dreams
Steam & Sorcery 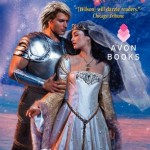