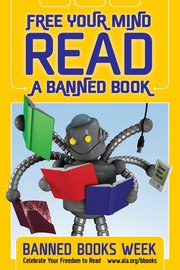 These organizations all have something in common. They all want to protect everyone’s freedom to make their own reading choices.

The U.S. Constitution, in the Bill of Rights, protects the freedom of speech and freedom of the press. It says nothing about the listener’s right to hear what is said, or the reader’s right to read what that free press publishes. If a tree falls in the forest, and no one hears it fall, does it matter whether the tree fell or not? Writers write so that their words are read, so that their voices are heard. If their works are suppressed, then the tree might as well not have fallen.

Every year books are challenged, and sometimes banned, from libraries across the United States. In a case this summer, the Republic Missouri School District banned two books from their high school library. Twenty Boy Summer, by Sarah Ockler, an extremely well-reviewed book targeted at grades 9-11, is still banned. Slaughterhouse-Five, a classic from Kurt Vonnegut, has been placed on such restricted access it might as well be banned. What do I mean by restricted? In order for a high-school student to check out Slaughterhouse, their parent has to come to the high school library to check it out for them.

Slaughterhouse-Five is Vonnegut’s science fictionalized version of his experiences in World War II. It is not the only work of science fiction on the frequently challenged list. Far from it. This week, SF Signal put together an incredible flow chart of the top 100 science fiction and fantasy books from the recent NPR poll. Looking at the chart, it’s amazing, and frightening, how many of those works overlap the banned and challenged list. Not just Brave New World and Animal Farm and 1984, either. But also Flowers for Algernon and The Handmaid’s Tale. Even The Lord of the Rings has been challenged more than once. And there’s always the never-ending irony that Fahrenheit 451 gets challenged frequently.

But it’s not really surprising if you think about it. Science fiction is the literature of ideas. New ideas are always challenging. And challenged.

As part of the observance of Banned Books Week, there is a Virtual Read-Out on YouTube of participants reading from their favorite Banned Books. Check it out.