I love Dickens’ A Christmas Carol. I particularly enjoy stories that re-interpret the classic tale just a bit, and Jacob T. Marley by R. William Bennett provides yet another delightful twist.

We all know Ebenezer Scrooge’s tale. His name has become a byword for miserliness due to the genius of Charles Dickens’ storytelling. But A Christmas Carol is the tale of Scrooge’s redemption. Ebenezer becomes a better man because Jacob Marley has spent his afterlife repenting of his sins. Jacob Marley has chosen to give his partner Ebenezer the opportunity to repent in life, while it might still do him, and the world, some good. Why did Jacob Marley send the Spirits to visit Ebenezer Scrooge that Christmas Eve? Just who was Jacob Marley?

Although Scrooge refers to Marley as “a good man of business”, Marley couldn’t have been born in his counting-house! He must have started out in the usual way, whether he had a family, or was an orphan, but he couldn’t have been hatched from an egg. A Christmas Carol isn’t quite that much of a fantasy.

Unlike Ebenezer Scrooge, who was mostly abandoned at boarding school, in this telling of Marley’s story, young Jacob comes from a loving but middle-class home with good parents and several siblings. Marley’s downfall is pride. His pride in his mathematical skill causes him to abandon anything that does not further his ambition and his need to be the best. He leaves his family behind: continuing his relationships with his parents and siblings wastes time he might spend on business.

One afternoon, angry at the delay caused by a funeral procession, he meets a young man who is just like himself. They have common cause in their irritation at the funeral, but different reasons behind that irritation. The deceased is Ebenezer’s sister, Fan. Ebenezer is angry that Fan died because she did not reveal her difficulties to him. He could have prevented her death if she had humbled  herself. It is her fault she is dead. Marley is angry at the delay. While they wait for the traffic to untangle itself, Marley offers Scrooge an interview at his counting-house.

Marley completes Scrooge’s transformation into the miserly man of business that we meet in Dickens’ masterwork. As we all know. Marley did not do Scrooge any favors. By the time Marley dies, there is no humanity left in Scrooge, he might as well be a walking account book. But as Marley lays on his deathbed and watches Scrooge, Marley recovers his humanity, at least enough to realize what he has done. He begins to atone. When he dies, he is given a chance to work towards his own redemption by trying to convince the spirits to give Scrooge a chance at his–before it’s too late.

Escape Rating: A+: I finished this in one sitting. I sat down for lunch and got lost in the book. The language evokes the classic without going over the top about it. And it retells just enough of the original to refresh the memory without seeming repetitious. We know the story. A little familiarity is good. Too much would be boring. This is just right.

I still have very fond memories of the first version of A Christmas Carol I ever saw — the Mr. Magoo cartoon version.  I can still remember him singing, “I’m all alone in the world” at the boarding school. The cartoon encapsulated the story; love, loss, redemption, and does it well.

It was time for Jacob Marley’s redemption. Well done. 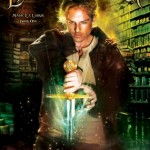