The Edinburgh Dead, by Brian Ruckley, is an extremely creepy, extremely gritty book mixing very black magic, Frankenstein’s monster, true crime body snatchers and the dark beginnings of Edinburgh’s police force. The Frankenstein element made this less of a historic urban fantasy and closer to horror than I expected.

The police sergeant investigating the case is Adam Quire, a member of the relatively new Edinburgh Police Department. Quire was a soldier under Wellington in the late Napoleonic Wars, and soldiering and policing are the only two things he’s ever been much good at, even if as a policeman he only seems to follow orders when it suits him.

In 1828, Quire is called to to a corpse in the Old Town section of Edinburgh. The corpse has been savaged by dogs, to the point that Quire hasn’t seen anyone this badly damaged outside of a battlefield. Napoleon having been finally defeated at Waterloo in 1815, Quire had hoped never to see a body this completely destroyed ever again.

The savagely deceased is eventually identified as Edward Carlyle, formerly in the employ of one John Ruthven. And it is in Quire’s questioning of Ruthven that the story really begins. Or perhaps descends into the pit.

Ruthven appears to be a wealthy man who can wreck Quire’s career with a few well-placed social calls. Ruthven makes his threats, and carries them out. But Quire knows from the beginning that Ruthven is lying about something, and Quire can’t let it go, even when his life is threatened. Quire knows that too much about the case is not what it appears to be.

And Quire is absolutely right. Ruthven’s whole life is a sham. He has been mixing black sorcery with an attempt at the same types of scientific experiments that Dr. Frankenstein performed in Mary Shelley’s literary masterpiece Frankenstein (published in 1818). Ruthven has more than succeeded–something dark and malevolent has come to inhabit his “monster”–it is not just alive, it is self-aware and very, very self-willed. 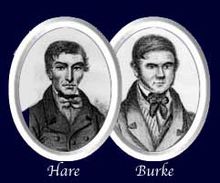 But Ruthven’s experiments must continue. He must do even better. And into this fictional horror there is added real horror. Ruthven needed more bodies for his experiments, so he contracted with William Burke and William Hare, real serial killers who were operating in Edinburgh in the 1820’s. Burke and Hare were providing fresh corpses to Dr. Robert Knox, an anatomy lecturer at the Edinburgh Medical College by murdering their victims and presenting Dr. Knox with fresh subjects for his lectures. Burke, Hare and Knox were real, and were caught in 1828. Presumably the ending was not quite as it occurs in Edinburgh Dead, although the case is gruesome enough.

Escape Rating C: There were a tremendous number of story elements. The early history of Edinburgh’s police department, the Burke and Hare serial murders, the medical education establishment in Edinburgh in the early 1800’s, the black sorcery, the Frankenstein’s monster. Juggling all of those elements, along with the character development required to maintain interest in Quire himself, took a lot of doing. It made following the plot more than a bit tangled at times.

Also, I wasn’t expecting it to be quite as heavy on the horror elements as it was. That’s a case of one’s mileage may vary.