By the time December rolled around, it’s pretty clear that the folks at Samhain Publishing were done with Christmas. Out of the 29 titles that Samhain published in December of last year, there’s only one Christmas book. Just take a look at their title list for December 2011 and you’ll see what I mean.

Samhain had other things on their publishing plate besides Santa’s milk and cookies.  On December 13 (not a Friday), Samhain launched their Retro Romance™ line. It’s their way of bringing out older titles that were previously published in print by a host of other publishers, and whose authors want to introduce their work to a new audience of ebook readers. Random House is doing something very similar with the revival of Loveswept, although the Loveswept revival includes some new titles. 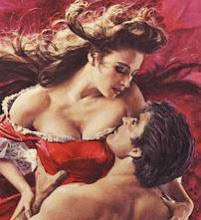 The romances from the Retro line did not pick up a lot of new reviews, but my research introduced me to the blog Get Yer Bodices Ripped Here, which definitely wins the award for best blog title of the month. This blog is worth reading for the 1970s, 1980s and 1990s vintage cover-picture inspired trips down memory lane as well as the absolutely inspired snark-fest reviews, which still tell the reader everything they need to know about each book. This blog is awesome.

But what about the featured books for the month?

The first featured title continues a trend for Samhain. This is the second time they’ve managed to scoop up an ebook-only novella in a popular print series. That popularity was reflected in the double-digit reviews all with B ratings and above for Thea Harrison’s True Colors, book 3.5 in her Elder Races series. The Elder Races books are paranormal romances about a group of very powerful, ancient shapeshifters called the Wyr. The series began in May, 2011 with the release of Dragon Bound, and the reviews for each succeeding book, Storm’s Heart in August, Serpent’s Kiss in October, have continued to raise expectations. Since book four, Oracle’s Moon, won’t be out until March, this novella is just enough to whet fans appetites for more. And did I mention that there are dragons?

Head Rush by Carolyn Crane is the conclusion of her Disillusionist Trilogy. Based on the ratings and the fourteen reviews, the fans who were waiting for this book will not be disillusioned in the least. This urban fantasy wowed the reviewers as the perfect conclusion to an enthralling trilogy, complete with paranoia, mind games, awesome characters and bad guys you really need to see get what’s coming to them. It also sounds like this one only works if you start at the beginning, so first Mind Games, then Double Cross, then, and apparently only then, Head Rush. The reviewers all say it’s well worth the trip.

Last at this round up we have Cowboy Casanova by Lorelei James. This is book 12 in her Rough Riders series. Rough Riders is clearly a guilty pleasure for a tremendous number of readers–Ms. James’ books have appeared on the New York Times Best Seller list. The Rough Riders series is erotica, and sex very definitely sells. The series takes place in Sundance, Wyoming, and each book stars a different member of the McKay family. And yes, they are all cowboys. Well, there is one sister. But every single book is smoking hot according to the reviewers, and Cowboy Casanova is sounds like one of the hottest of the bunch. The reviewers are split on whether it’s necessary to read the whole series and get the background on the McKay family to fully enjoy the story, so if you want to start with the first book in the series instead, that was Long Hard Ride.

That’s  it for this week’s Ebook Review Central. We’ll be back next week with the multi-publisher post covering Amber Quill, Astraea Press, Liquid Silver and Riptide Publishing. And we’ll finish up 2011 in style!