Resurrecting a horrifying and romantic narrative that broke fresh ground for its genre, this soon to be re-released novel sets a vampire story in contemporary Los Angeles—the pleasure dome of late 1990s sex, drugs, and rock ‘n’ roll culture. Unlike the vampires that came before her, Justine does not shun crosses, she watches horror movies on television, and she sets upon her prey in an almost apologetic way, never killing her victims but leaving them unconscious instead. She soon finds herself entwined in a very human sexual relationship with Keith, a down-on-his-luck rock guitarist whose hands have recently been mangled by a gang of drug dealers. Justine nurtures Keith out of his depression and drug addiction as he in turn becomes her lover and accomplice in her nocturnal predations. The relationship between the undead and the living is realistically and tragically portrayed as Keith acts both as Justine’s enabler and unwitting nemesis and, in this classic role reversal, ends up having to destroy the one he loves in order to save her.

Although this story was subtitled “a modern romance” I didn’t see it that way. I read it as a story about co-dependency and obsessions. Which definitely made the “modern” part of the subtitle truer than true, but kind of nixed the romantic aspects. Not that a whole lot of romantic relationships don’t have their co-dependent aspects.

But it’s the obsessions that drove the story for me. And I kind of got compelled to finish it. So maybe I got sucked into the obsessions a little bit, too.

Keith starts out as a washed up guitar player, and a heroin addict. The vampire Justine picks him up off the streets and gets him addicted to her, instead. They start out as two people who basically don’t care if they live or die.

But Keith’s problems are human problems. His ex-girlfriend committed suicide, and her other boyfriend (yes, it’s complicated) blamed him. Said other boyfriend sent his goon squad to break Keith’s hands and plant drugs in his hotel room. The broken hands ended Keith’s career as lead guitar player for a major rock band. Ending his music ended the only life he cared about.

But by making Keith an addict to whatever her vampire serum was instead of smack made Keith a functional addict. It gave him time to heal the emotional damage. Time really does heal all wounds. As Keith heals, he comes out of his comatose state of depression and starts to connect to the world again. But he’s alone most of the time with a very beautiful woman and a very dangerous secret.

As Keith connects to the world, he comes to life. Not just physical life, but emotional life. He’s young, handsome, and he needs her. Justine falls in love with her “Renfield”. Love gives her world the life and color and meaning it hasn’t had for centuries. Justine and Keith become obsessed with each other, as new lovers often do. It makes them vulnerable.

But Justine has been a vampire for 400 years. She’s survived by forgetting a lot of the things she has done. One of the things she has forgotten is that she made another vampire in LA. One that she shouldn’t. Not because it’s forbidden or because there are any rules or because vampires are even organized, but because this guy was a monster when he was human, back in the 1920s at the dawn of Hollywood.

Becoming a vampire didn’t make him much more of a monster, just a more powerful one. His obsession is Justine, the vampire who made him. He wants, no he needs to be the most powerful vampire in LA. And he wants to be sure that no one can contradict all the stories he tells. The only way that can happen is if he takes Justine out of the picture.

So when a young doctor discovers Justine’s secret, Justine is open to the idea of finding a cure for Keith’s damaged hands. And it sets the scene for her old enemy to use that vulnerability to rain destruction on them all.

Although I felt compelled to finish Stainless, there were a few things that didn’t quite work for me. The changes of point of view between Justine and Keith, the doctor Tamara and her fiancée Patrick, and the second vampire, David, and his minions, can be confusing. And there are a lot of points-of-view to follow. It’s easy to get lost. The melodramatic aspects of David’s evil did reach “over the top” proportions for me, although that’s a matter of personal taste. I might have liked the story better if David had been less of a stereotype, because one of things that made Justine interesting was that she wasn’t a stereotypical vampire.

The ending is the only ending possible. It’s inevitable and it’s exactly right.

I give Stainless three stars. 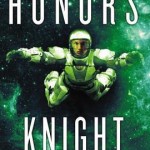 Review: Honor’s Knight by Rachel Bach
Review: On One Condition by Diane Alberts
ARC Review: The Saint Who Stole My Heart: by Stefanie Sloane
ARC Review: The Devil of Jedburgh by Claire Robyns