I got hooked on M. C. Beaton’s Hamish Macbeth series back when I used to drive a lot. Notice I said hooked. Rather like a trout in Macbeth’s lovely Highland village of Lochdubh, I was caught, and now I can’t escape the net.

The latest entry in the series is Death of a Kingfisher. The Kingfisher in this instance is a beautiful bird, the showpiece of The Fairy Glen, a new tourist attraction at the nearby village of Braikie.

The locals weren’t to happy about The Fairy Glen, not at first, but it’s brought tourist traffic and tourist money to an economically depressed area of Sutherland, and the owner, Mary Leinster, has charmed the pants off of any opposition. In the case of her male opposition, possibly literally. She’s also played successfully on long-held superstitions. Mary doesn’t just claim to have the “second-sight”, her vision of a boy falling in the pond came true, and the boy nearly drowned.

But the death of the beautiful kingfisher was no accident: the bird, his mate and their chicks were poisoned.

The kingfisher is the first to die, but not the last. And the other deaths are human. First a wealthy and elderly woman dies when her motorized wheelchair lift practically skyrockets her up a staircase, and it is discovered that the seatbelt of the chair was tampered with. The woman may have been a cantankerous old baggage, but she didn’t deserve to fly through her own skylight. Then it’s discovered that she was robbed before she was killed.

After that, murders turn up all over the township, as anyone who hints at knowledge of the murder or the robbery is mysteriously eliminated before the police can question them.

And what about the police?

Hamish Macbeth is the local constable in Lochdubh. His tiny station covers most of the small towns and villages in the county of Sutherland in the Scottish Highlands, which is actually very far north.  Hamish wants to be sure he stays in Lochdubh, the place he loves, and does not get sent to the “big city” of Strathbane.

So Hamish usually makes sure that credit for solving the crime goes to someone else, so that he can remain just where he is. However, he continually worries that budget cuts may close all of the local stations, and there won’t be any place for him except Strathbane.

This crime has him stumped. The suspects always seem to have an alibi, and the alibi is usually CCTV. But there are two sets of crimes. The murders, and the robbery. Once Hamish realizes that there may be two sets of perpetrators, and that there are ways to fool CCTV, he’s well on his way to solving this mess, and getting back to his life.

Escape Rating B: Hamish is a likeable character, and this is a police procedural series although sometimes Hamish spends more time trying to figure out a way around the procedures than using them. But once he figures out which way the crime might have gone, it’s easy to get caught up in the chase.

One of the very interesting things about Hamish is that he has found the place he wants to be in life, and is doing everything he can to stay there. At the same time, he needs to make sure justice is done. So he lets others take the credit. 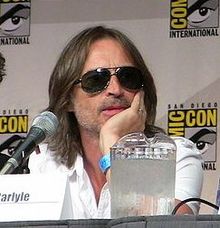 Something I discovered recently: BBC Scotland loosely based a TV series on the Hamish Macbeth series between 1995 and 1997. In the books, Hamish is described as very tall, thin and with bright red hair. The actor who portrayed Hamish in the series is Robert Carlyle, best known in the U.S. as Doctor Nicholas Rush in Stargate Universe, and Rumpelstiltskin/Mr. Gold in Once Upon a Time. Hamish is extremely likable. Rush and Gold are anything but. I keep wondering which one would be considered casting against type?

2 thoughts on “Death of a Kingfisher”