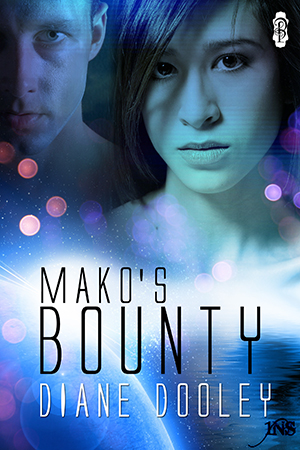 Mako’s Bounty by Diane Dooley is part of Decadent Publishing’s 1 Night Stand series. And that description just about encapsulates the book. The story is about a one-night stand, and it is a decadently delicious little treat of a science fiction romance.

Mako is Makiko Dolan, and she is an intergalactic bounty hunter. With a name like Makiko, and a profession like hers, winding up being nicknamed for the earth-bound shark seems only natural. Especially since Makiko, like the shark she is named for, always puts the bite on her prey.

Her prey in this story is a man named Vin Sainte, who naturally has a nickname of his own: “the Saint,” of course. The Saint is on the run from Ravenscorp, the evil mercantile empire that controls the galaxy, or at least the human-inhabited corner of it.

Mako has been chasing the Saint for months, because she needs the major bounty he’ll bring in. Ravenscorp has been keeping Mako’s mother imprisoned in indentured servitude, and Mako desperately needs a big payday to get her out.

So Mako chases the Saint to Earth. Literally to Earth, as in the planet Earth. She’s arranged a meeting. Not just an ordinary meeting, but a one-night stand arranged through Madame Eve’s exclusive dating agency. Mako’s plan is to sex him up and then handcuff him while he’s still “recovering”.

Mako doesn’t count on the sensory overload she gets from being on Earth for the first time. She’s used to the deprivations of a backwater colony–and the empty vastness of space. Earth is almost an LSD trip.

But Mako’s big surprise is the Saint himself. She’s been studying his picture for months. But in person, he’s, well, she has to admit to herself that he’s the best looking man she’s seen in a long time. The Saint is a major part of that sensory overload.

And even bigger surprise is that he knows exactly who Mako is, and why she’s there. The Saint knows it’s a honey trap. He’s there to bring the little shark over to his own cause.

Until Vin Sainte met Mako, he thought his mission was just to convert the bounty hunter from Ravenscorp’s side to his.

When he finds her naked in his hotel room, he realizes that he needs to convert her to his cause, heart, body and soul.

Escape Rating C+: This story is cute and fun. It’s a very quick and enjoyable dip into the science fiction romance pool.

However, because the story is very short (about 40 pages) there isn’t time to do a lot of worldbuilding, so the science fiction part rides on some assumptions. The beginning has a very good SF feel at the space station, and I loved that one ship was named Gagarin.

But…adjusting to Earth’s gravity wouldn’t be that easy for a lifetime spacer, or I don’t think so.  The mental adjustment, perhaps, but the physical, not so much.

The bigger question for me was Vin Sainte’s religious beliefs. He is a devout practitioner of a religious faith that isn’t named but seems awfully familiar. He certainly prays a lot, and at surprising moments. In a story of this length, inventing a religion would have taken up a lot of worldbuilding time. That being said, assuming that current religions would survive into space relatively unchanged seemed a stretch.

Of course, there’s that scene from the end of the Babylon 5 episode The Parliament of Dreams, where representatives from ALL the Earth’s religions come to the station in 2258. It could happen.

One thought on “Mako’s Bounty”