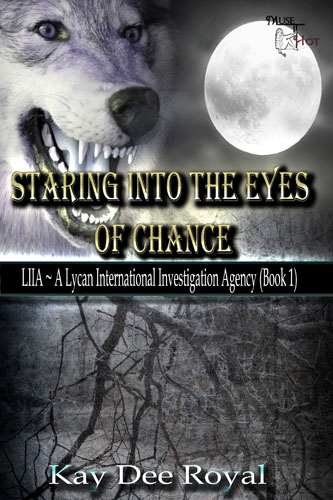 Today I’d like to welcome Kay Dee Royal to Reading Reality.  author of Staring Into the Eyes of Chance (reviewed here), Kay Dee is here as part of a Bewitching Book Tour to talk about her new book and series.

Hello Marlene, thank you for having me today. 🙂

I enjoyed writing both of their stories and completely resonated as the two of their lives began to entwine.

Olivia walked away with my emotions.

This woman was marked as different from an early age because of her ability to “read” wildlife/animals. As a child, she thought everyone could do this, until bullies knocked the wind out of her preteen years, shoving it in her face that she was a weirdo. From that time on, only a select few knew of her gift with reading an animal’s mood.

She opened a wildlife rescue and preserve on two-thousand acres.

The other thing about Olivia was her incessant loyalty to her husband of thirty-four years, even though he never showed her passion, nor did they ever have children. He traveled more than he lived with her, and at his funeral she discovered he’d been a philanderer their entire marriage. Her trust and faith in any man ended, broken.

His story begins with the death of his mother during his birth. It merited his older brother’s hatred and his father living as a shell of a man from the loss of his mate. Both his father and brother died in accidents, shortly before Chance was to take the Alpha position in the pack.

His father’s dwindling life (before the accident) tore Chance in two. When both his only living family died, he jumped into his Alpha and LIIA position full force, not caring to find a mate and go through the loss of another loved one.

OH, also, Chance has a special ability…besides the capabilities of Lycan, he has premonition visions.

What brings these two together when they are so unlikely to find each other? Good question.

A killing machine of a rogue Lycan named, Smoke. He leaves a trail of death and destruction where ever he goes, and Chance tracks him onto Olivia’s wildlife sanctuary…but Olivia won’t have anyone trekking around her property.

There’s a number of reasons why, all of which are within the pages of Staring Into the Eyes of Chance. 🙂

Here’s a bit about it:

Olivia swears off men until she meets Chance, a Lycan alpha. He ignites an undeniable hunger they can only sate together.

Olivia endures a thirty-four year passionless marriage, discovering her dead husband’s philandering history at his funeral. She devotes her energy and life-long sensitivity with animals to her wildlife refuge and preserve.

Chance, a Lycan alpha and leader of the Lycan International Investigation Agency (LIIA) throws himself into his investigations. He chooses to neglect his duty of finding a primal-mate after watching his father become an empty shell over the loss of his.

Will they succumb to its enticing tether, or fight to resume their loveless lives apart?

She resides in Southern Michigan with her family (her dogs, her cats, her caged husband… you get the idea)

You can reach her at: 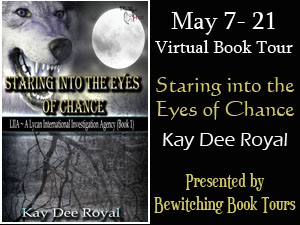