Welcome to the Omnibus publisher April wrap-up post for Ebook Review Central. This is always the last post covering the month (in this case, April 2012) and it’s the one covering the most publishers in one swell foop.

This time round, we have five publishers all in one go. The Amber Quill Press coverage includes whichever imprint Amber happens to publish under. Mostly it’s been Amber Allure, their M/M imprint, with the occasional title from either Amber Heat or, this month,  Dear Viking by Lori Soard, a historical/inspirational title from their non-erotic imprint, Amber Quill itself.

The other publishers in the omnibus with new titles in April are Astraea Press, Liquid Silver Books, Red Sage Publishing, and Riptide Publishing. The Curiosity Quills database was also updated this month, but they didn’t publish any new titles in April. Don’t worry, they’ve got new stuff in May. (I peeked ahead. I do that with mysteries, too.)

I’m going to do something different with this week’s featured books. There are five publishers in this week’s edition. I am going to try to spread the feature around more.

Going by sheer number of reviews alone, I could feature all three Riptide titles every time. The only time someone else would get featured would be the months Riptide only published two titles. I say this as an observer of the evidence at hand. It’s either good books, good PR, or good both.

But in order to make sure other books get some play, there have to be some other considerations. And one of the reasons I started ERC was to provide a place for librarians to find reviews of ebook-only titles. Some of the featured books need to be from publishers that libraries can get, if those books did well.

Above all the featured books and this featured article, have to be interesting to readers.

So with those things in mind, this week’s featured books are the following:

The number one book was the Riptide title I couldn’t resist, it’s the Josh of the Damned Triple Feature #1 by Andrea Speed. All of the Josh of the Damned books (Pretty Monsters, Peek-a-Boo) just sound like an old-school B grade Sunday movie matinee horror feature, as lampooned by Mystery Science Theater 3000, and the description of the Triple Feature short stories goes it one better. A character in one of the stories is nicknamed “Professor Bobo”, a direct nod to MST3K. One of the other short stories is “I Was Cthulhu’s Love Slave”. Really? Too funny. Josh, the damned guy, who is human, works in a convenience store. His boyfriend is a vampire. But most of the weird problems Josh has working the night shift are human. Of course they are. Well, maybe except for the lovesick yeti.

The second feature story is Cinderella. There’s always a Cinderella. There always has been, and always will be. It’s one of those tropes that has been imprinted in our collective DNA. But the version of Cinderella in Sinders and Ash by Tara Lain is quite a bit different from the usual. Like many modern versions, it’s a bit difficult to figure out who rescues whom. Whether Ashton Armitage, the son of the fifth richest man in America rescues Mark “Sinders” Sintorella from a life working as a housekeeper in a ritzy resort–or whether Sinders rescues Ash from a life of not just hiding in the closet but also stultifying boredom. And it’s still a fairy tale, complete with a fairy godfather this time, of course. The mistaken identity part is even still there, helped by a smidgen of cross-dressing. 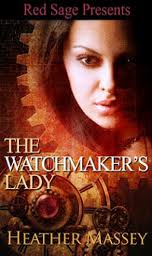 I picked the third book because it is from a publisher that is available to libraries and because it received a very favorable review from RT Book Reviews. (And yes, I liked it too.) The Watchmaker’s Lady by Heather Massey is the first book in her Clockpunk Trilogy. Clockpunk is steampunk with very small parts, in case you’re wondering about the term. So instead of big steam engines, think very small mechanical devices, doing very wicked things. The Watchmaker’s Lady is about a watchmaker who uses his skills to make an advanced automata, and uses his watchmaking skills to make clockwork devices for ladies’ intimate pleasures, so he can fund his experiments with his automata. Then things get very, very out of hand. So to speak. The twist at the end of the story is quite a surprise.

That’s a wrap for this week’s featured titles. We’ll be back next week with another edition of Ebook Review Central, taking a look at the Carina Press May books.