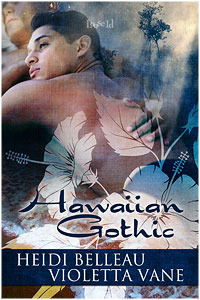 Ori and Kalani were childhood friends too afraid to be lovers. Now in their darkest hour—Ori disgraced and Kalani a wandering spirit—they’ll fight the world and death itself for a second chance.

Gregorio “Ori” Reyes thought there was nothing left for him in Hawaii. A former Army Ranger and promising MMA fighter, his dishonorable discharge turned him into the family disgrace, and his childhood best friend Kalani never could love him back–not the way Ori needed to be loved–even before Kalani’s doctors declared him to be in an unrecoverable coma. Ori’s return to Hawaii seems fated to be a depressing reminder of every chance he never took… until Kalani himself impossibly welcomes him home.

Kalani’s body is bedridden, but his spirit is free to roam, and it turns out it’s not just Ori who had unspoken yearnings. Kalani is eager to prove that he can still savor all the pleasures of this world. Together, they remember all those years of surfing, wrestling, touching and aching but too afraid to act; now, they cross that final barrier and struggle against each other in an entirely different way.

Passionately but tenuously reunited, the pair must solve the mystery of Kalani’s unlucky life, sorting through dark family history and even journeying to the Hawaiian ghostworld. And the greatest terror of their journey is that Ori might have to put Kalani to rest.

“Gothic” implies dark and mysterious goings on, an interesting balance against the bright sunniness of Hawaii. This book is a juxtaposition of many more things, with an unique structure, and it works out in a most surprising fashion.

The story opens in the middle—Ori’s now released from Leavenworth, and Kalani’s lying comatose in a hospital bed, the victim of a savage attack. Many things are not what they seem, including Kalani meeting Ori at the airport.

Ori’s spent much of his life yearning after Kalani, who’s always been there as a friend, but there’s never been anything else between them, until Ori return’s from the mainland, wracked with guilt over Kalani’s condition—he wasn’t there to prevent the catastrophe, and now feels that he lost every chance. It’s never that simple, though, because Kalani finds that being freed of his body has freed him from a lot of inhibitions. As a wandering spirit, he can manifest near his best friend, but he can’t stay in this form forever, and there are choices to make.

This is an extremely non-linear story—important chunks of flashback take us back and forward in time, revealing important details about the men and their relationship—fast friends since nearly forever, they complement each other in many ways, but haven’t taken the step to be lovers until it’s nearly too late. Ori also has a mystery to solve—who did this to Kalani, and how can his spirit go on to its proper destination, wherever that might be?

A substantial portion of the story takes place in the Hawaiian spirit realm, a place I’ve never visited even in fiction, because of Kalani’s background. Ori tries to follow and understand, and his own Filipino and fighting background gives him tools to work with. The spirit realm is far from benign, and for Ori to reach it takes a bold and gruesome act, so this story may not be for the squeamish, though the rewards for the persevering reader are great.

At one point the story steps backwards in time and out of the main characters’ POV, to a time before Kalani’s birth. His mother Malia, who is variously loved and reviled, lays the foundations of all that is to come, in a brief excursion into a non-standard but loving relationship. Ladybits warning for the M/M purist, but this section is important, beautifully done, and both romantic and tragic.

A few things seem a little overdone, like Ori’s career as both an Army Ranger and an MMA fighter, but serve to highlight his fall from grace and his return to it. He is a man who understands sacrifice and duty, and doing the hard tasks. I wanted to hurt one of the secondary characters for taking steps to harm the innocent, but that character does achieve a kind of redemption.

I loved this story for bringing me into unfamiliar cultures and places, including the parts of Hawaii tourists never see, and for letting me share the evolving relationship between Ori and Kalani. It’s is hot, loving, a little tentative in its changes but built on a solid foundation. Also, hot. These characters have to work extremely hard for their happiness, and I was glad to follow along.  Escape Rating B+