The Ether Chronicles is a cooperative steampunk venture, or is that adventure, between writers (and real-life spouses) Zoe Archer and Nico Rosso.

The first book in the series, Skies of Fire, took place in more traditional steampunk territory, assuming there is such a thing as tradition when it comes to a genre as “new-fangled” as steampunk. It’s set on the European side of this alternate, steam- and “ether”-powered world war and it’s written by Ms. Archer, as will be the third book. 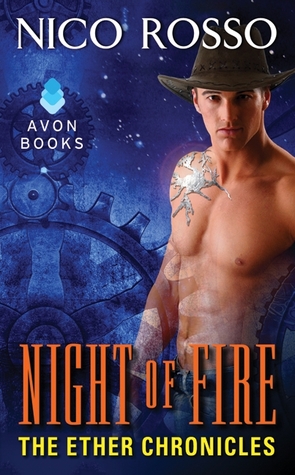 Mr. Rosso is responsible for Night of Fire, set in the U.S. West. Less traditional, not just for steampunk, but in general. The West of the late eighteenth century was the frontier, with wide-open spaces and people who didn’t want to be hemmed in.

There’s a war going on, and men are called away from their homes to fight against the Hapsburg enemy. Just as happened in real history, particularly in World War II, when the men are called away in large numbers, women fill roles that used to be reserved for men. And some of them find that their new roles suit them much better than the ones they would have traditionally found.

And some men think that this new assertiveness fits those women better than the old traditional roles ever did.

The  Army has also given Tom Knox a new role in life. In Thornville, he was a boy from the wrong side of the tracks. The US Army has made him not just a soldier, but a leader. It’s given him purpose and responsibility. The Army doesn’t care where he came from, only how he conducts himself. And he’s not a boy any more.

The war has brought him near enough to Thornville to visit. To find out what happened to the girl he left behind. Rosa Campos’ father ran him out of town, said Tom wasn’t good enough for his daughter. And he was right, then.

Now, Rosa is the Sheriff of Thornville. She’s the only one man enough for the job, in spite of her father’s protests. The first thing Tom sees when he rides back into town on his ether-powered “horse” is Rosa fighting off a band of roughnecks, who aren’t just hooligans testing the “lady lawman”.

They’re the front for a completely different threat, one that’s going to literally gobble up the entire town, if Tom and Rosa don’t set aside three years of simmering resentments and disappointments and face the threat together, instead of fighting each other.

About that simmering…the fire they sparked between them before Tom left still burns as hot as ever, but they can’t afford the distraction. Distraction will get them, and everyone around them killed.

But once they defeat their mutual enemy, if they survive, can they find any feelings left for each other beyond lust, disappointment and pain? Did they lose their chance at happiness by not fighting for it hard enough, all those years ago? 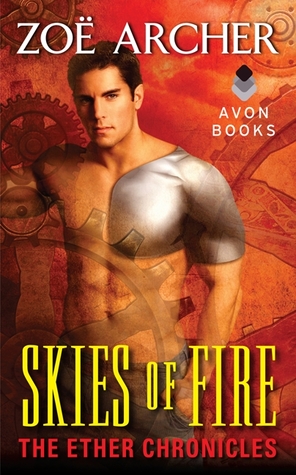 Escape Rating A-: There are three stories going on in Night of Fire, and all of them are terrific. One is the war, and for background on the war with the Hapsburgs, read Skies of Fire by Zoe Archer first. It’s tremendous fun, especially if you love steampunk. The information on what ether and telumium (the mineral that makes it all possible) are is there.

The second story is the Western “save the town” story. The sheriff needs to fight off the evil mining corporation that planning to swallow up the good ranching land and the good ranching community. This tale stands the usual trope on its head by having the corporation plan to literally swallow the town. Only in SF or fantasy (or one of their cousins like steampunk)!

Third, of course, is the romance. Tom and Rosa are doing the second-chance dance. They loved before and war has given them another try. They’ve grown up; they weren’t the people they were before. They didn’t fight hard enough before, they weren’t ready. This time, the stakes are much, much higher, but they’re much stronger. But they’ve got a lot of internal resentments to overcome, as well as the obvious external forces arrayed against them. It’s one hell of a fight.

And I wish the story had been a bit longer. This was an awful lot of stuff to pack into 100 pages. I loved it. I would have loved it more had there been a little more of it. Which means I can’t wait for the next one.

2 thoughts on “Review: Night of Fire by Nico Rosso”