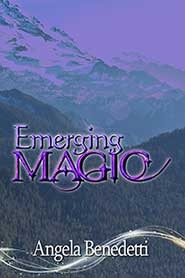 Rory’s mother took him to psychiatrists, let them circumscribe his life, let them give him drugs, while knowing all along there was nothing wrong with him. When Rory finds out, he’s angry and confused and just wants to get away for a while. His mother’s betrayal plus another kidnap attempt make a visit to the father he hasn’t seen in ten years seem like a great idea.

When Rory, Paul and Aubrey get to Seattle, though, it’s obviously not going to be just a normal family Christmas. Someone north of San Jose tried to kidnap Rory twice before they left, and it’s too much of a coincidence that Nathan, Rory’s dad, has magic talented friends. While Rory tries to reconnect with his only other family, Paul is trying to figure out whether anyone in Nathan’s group is after Rory. They definitely have secrets, and at least one of them has been playing around with things he doesn’t understand. The local fey are after him, and elves aren’t known for caring too much about collateral damage.

And there’s a master wizard in the area who’s up to something big and would really like to have Rory’s help….

See the first installment of Rory and Paul’s story in A Hidden Magic: Sentinels Book One. 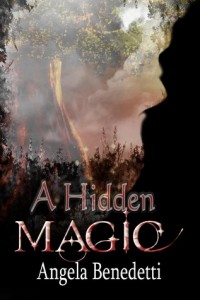 I’ve been waiting for this book for every minute since I finished A Hidden Magic. The Sentinels universe, as well as Paul and Rory, had way too many possibilities to leave it at one lone novel, and my (im)patience has paid off at last. Magic exists here, though not everyone believes in or perceives it, and humans are considered low on the magical power scale.

Spoiler for book one, sorry, but we left Paul bereft of his magic—the only way he saw to accomplish a greater good. Rory, his new lover and possessor of magic beyond most mages’ dreams, is there for him during this time of adjustment. Paul in turn is a bulwark for Rory as he processes the monumental betrayal that is the reality of his mother’s protective instincts gone berserk. Left defenseless against magical attack and confused why anyone would try, Rory’s had more adventure than he could stand in A Hidden Magic.

Matters don’t stay peaceful for long in Emerging Magic. Having fended off two attempts on another abduction, Rory figures that getting away from his usual haunts is good, getting away from Mama Manipulation is really good, and reconnecting with the father who left during his youth is the best reason to leave town. If at the same time Rory and his magically talented friends can track down the rogue mage calling himself Aziraphale, better yet.

This is very much a sweater to ball of yarn story—tug on one loose end and a row comes loose, followed by a sleeve; another tug, and there goes the neckline. Each small yank reveals another skein of the truth, but until all the major players are gathered together to find out exactly how deep in hot lava they stand, Rory is the center of several plots devised by persons of greater or lesser integrity and good will.

Trusting his own instincts is something Rory is ill-equipped to do, though he’s working hard to develop his own judgments. Paul is wise enough to not step into the judgment vacuum, but cares enough to pick up the pieces should they go smash, and fortunately, Rory has enough strength and enough trust in the trustworthy to keep most of the Pacific Northwest from turning into wasteland.

Several delightful characters from the first book return here, from Azzy the junk-food-junkie pixie to Willowen, an elf of enormous power, boundless curiosity, and caustic words for the terminally stupid. Aubrey, a centuries-old mage, and his apprentice Cal, who is the only one who can curb Aubrey’s stinging teaching methods so that the students actually benefit, have a large supporting role. They bring a mordant humor plus a good look at a loving relationship between the magically unequal.

The story is a lovely mix of new relationship between Paul and Rory, a huge dust-up among the magically gifted and those who wish they were, and mages who think they have a Grand Plan for saving their corner of the world all the while riling beings whom it does not do to annoy. The ending wraps matters justly and ethically, if not always happily, an excellent choice on the part of the author, who understands that fairness doesn’t mean everyone’s pleased.

My niggles: a few issues wrap more smoothly than perhaps they should, and Rory’s sense of self-preservation ought to make him question everyone and everything, though he remains dangerously trusting in some directions. Every time he brushes his hair he has reason to remember how others would use him for their own purposes: an elven lady grew it to his knees for her pleasure, not for his. Naïve perhaps, but Rory gives the readers incentive to talk back to the book, and a facepalm moment or two.

Rory’s personal and magical growth and the machinations around him that provoke it are the primary focus of the tale, although the romantic aspect is indispensable and important. Paul’s role is supportive and contradictory: what he would do as a lover is not what he can or should do as a Sentinel. His and Rory’s physical relationship is mostly fade to black and when not, couched in language more poetic than earthy. It’s a joy to watch them learn each other—their relationship is only weeks old in their timeline and they still have a lot to work out.

This universe is rife with characters who should have stories: Aubrey and Cal are strong supporting characters here but could easily star in their own book, and Manny, left behind in San Diego, needs face time. The Sentinels universe has endless possibilities both romantically and magically. The series currently has two novels available in ebook and trade paperback and several e-shorts; I hope Angela Benedetti is busy plotting the next installment.  Escape Rating: A- 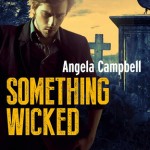 Review: Something Wicked by Angela Campbell
11 for 2011: Best reads of the year