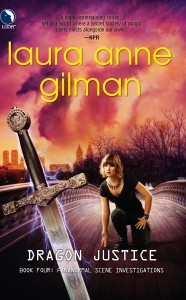 Dragon Justice is the fourth book in Laura Anne Gilman’s Paranormal Scene Investigations Series, after Hard Magic, Pack of Lies, and Tricks of the Trade. She’s been building this urban fantasy version of New York City and its world for quite a while, ever since the first book in her Retrievers series, Staying Dead. And what a world it is! If you love urban fantasy I dare to to read the words “Cosa Nostradamus” without your imagination opening up into a smile of wonder. Concept and pun in one single phrase.

Dragon Justice, being the fourth book in the PSI series, builds on everything that came before. (See my review of Tricks of the Trade for details about prior events in the series) 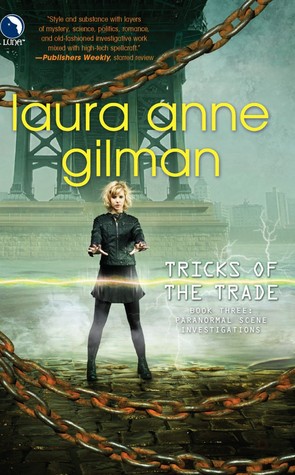 It helps a LOT to have read the other books in the series. That’s no hardship. This series, both these series, are awesome. But it makes it damn difficult to write a review as though this book stands alone.

Dragon Justice has the feeling of a middle book in the story arc. Each individual book in the Paranormal Scene Investigations Series uses a police-procedural-type framework — the PUPIs are investigators, after all. So there is a crime that needs to be investigated. But that’s not the biggest part of this particular story.

The big things are the forces moving in the background. Ian Stosser and Ben Venec are the two “Big Dogs” at PUPI, and they go off in different directions. Ian gives everyone a vacation so he can take care of some family business. Alone.

Ben goes to Philadelphia to work on a private security contract at a small museum. Ben turns out to be much smarter than Ian. He invites Bonnie Torres, one of the PUPs, to come to Philly. Whatever Ben’s original motives might have been (and yes, they were exactly what Bonnie is hoping they were) when a dead body turns up, the PUPIs start an investigation. The victim wasn’t Talented, but Talent seems to have been used to kill him.

While Ben and the team are working in Philly, Ian is in New York City dealing with problems of his own, and they are big ones. Two of the biggest; money and family. It takes a lot of capital to start up and investigative service like the PUPIs, and it requires a lot of specialized equipment. Expensive. The Cosa has some very unsavory characters in it, including loan sharks. Bloodthirsty ones who demand actual blood.

And then there are the long-standing problems that Ian has had with his sister Aden, problems that go way beyond sibling rivalry. Aden believes that only the Cosa Council should have the power to police and punish Council members who commit crimes. Ian knows the system is broken, that’s why he started the PUPIs in the first place. Ian believes in that old principle from Spider-Man, “with great power comes great responsibility.”

Aden thinks the Council is capable is watching over its members, and that no one else is fit to judge them, because the Council members are the most powerful Talent-users. Aden has forgotten the principle that “Power tends to corrupt, and absolute power corrupts absolutely.” She’s tried blackmail, she’s tried boycott, she’s tried a smear campaign. Nothing has stopped her brother. She resorts to finding people with even greater power than the Council, not thinking that anyone with that much power won’t stop Ian with just a warning.

If someone wants PUPI stopped so badly that they will kill for it, then something truly evil must be coming. Bonnie and Ben need even greater help to save themselves and their friends from what Bonnie’s sense of kenning sees in the future. But the price of enlisting the aid of Bonnie’s friend Madame, the dragon who watches over New York, is very, very high.

Sometimes the myths are true.

Escape Rating A: There is a LOT going on in this story, and it all matters. It also ties into the original Retrievers series, with cameos from not just Wren Valere, but also her partner Sergei Didier and the demon P.B. (Someone really needs to make a P.B. plushie!)

The depth of the world having already been built really tells. Things feel solid. The reader knows who Founder Ben is, what Bonnie means about needing to top up her current, or why all the PUPs need to restock on food as much as they do. Current uses real energy. The interactions between Council and Lonejack and Fatae are already well-established.

And Ian Stosser is an idiot. He built up this entire organization, and then he continues to handle too many things as if he has no backup, and no responsibilities to anyone other than himself. I know the character is that way for a reason, and I still want to reach in and shake some sense into him. Idiot.

There’s also some foreshadowing that old enemies from the earlier series are building for a comeback. This is not a good thing for Bonnie or her world, however excellent for the story. But I bet things are going to get darker before they get lighter again. I can’t wait for the next book.

One thought on “Review: Dragon Justice by Laura Anne Gilman”