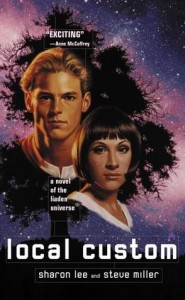 Master trader Er Thom knows the local custom of Liaden is to be matched with a proper bride, and provide his prominent clan Korval with an heir. Yet his heart is immersed in another universe, influenced by another culture, and lost to a woman not of his world. And to take a Terran wife such as scholar Anne Davis is to risk his honor and reputation. But when he discovers that their brief encounter years before has resulted in the birth of a child, even more is at stake than anyone imagined. Now, an interstellar scandal has erupted, a bitter war between two families–galaxies apart–has begun, and the only hope for Er Thom and Anne is a sacrifice neither is prepared to make…

I have been meaning to re-read the Liaden Universe books for a while now. I loved them when I initially read them (meaning I swallowed them whole) in 2005-2006, but haven’t kept up with the newer ones. That “so many books, so little time” problem rears its ugly little head yet again.

When I heard that Audible was releasing the entire series in audio, I decided that was my opportunity. I could listen to everything! “Foolish Terran!”as the Liadens might say.

Sometimes when we revisit a beloved book we remember fondly, the re-read makes us wonder what we saw in it the first time. Memory does not hold up on close re-inspection. This was absolutely not the case with Liaden. 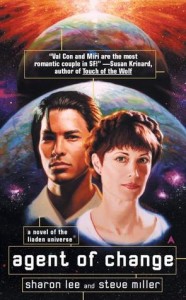 I started with Local Custom, because that’s where I started the first time. There are multiple possible entry points for the Liaden Universe, but two of the traditional ones are Local Custom or Agent of Change. (Agent of Change was written first but Local Custom occurs first in the internal chronology with most of the same cast of characters.)

The story is every bit as marvelous the second time around as it was the first time. Possibly more so, as I understand the background without remembering every single detail of each individual book.

Local Custom is both space opera and romance. Er Thom yos’Galan knows his duty to his clan is to take a contract wife and provide his clan with an heir. Duty to the clan is everything to a Liaden. But his heart is still fixed on the Terran scholar Anne Davis, a woman he met while overseeing his clan’s far-ranging business as a Master Trader. He should have let the thought of her go long since, but he cannot. So he takes leave of all his obligations, and they are more than Anne Davis ever knew they were, to see her one last time, and say a final “Goodbye”. Only to discover that she has already given him his heir, not knowing that the Master Trader she loved is actually heir to the richest clan on Liaden. And that she and her son are now pawns in a deadly game.

Escape Rating A+: I wish I had more pluses to give. I started to listen to the Audible recording, and became so caught up in the story that I found myself hunting for excuses to do things that would let me listen longer. I wasn’t getting anything else done!

I gave up and bought the entire ebook bundle from Baen, and finished the book that way. I enjoyed the audio, but it was just taking too long. My only regret about the audio is that Audible wasn’t able to get the rights for the original audio recording by Michael Shanks. I would love to hear him read the story as Er Thom.

If you enjoy space opera, and have never read the Liaden Universe books, start now. If you like romance in your science fiction, start with Local Custom. If you prefer more adventure and intrigue in the mix, choose Agent of Change as your starting point. But start now.

(If you do read ebooks, Baen is very reasonable about ebook prices. Everything is either $5 or $6 and they have downloads for every format you can think of: Kindle, EPUB, RTF, HTML, Read Online! Baen also does not use DRM.)