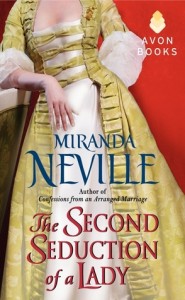 Enter the thrilling, sexy world of Georgian England in this splendid Miranda Neville novella—and catch a glimpse of Caro, the heroine of the upcoming The Importance of Being Wicked, on sale December 2012.

Eleanor Hardwick and Max Quinton shared one night of incredible passion . . . that was shattered the next day, when Eleanor learned of a bet placed by Max’s friends. Now, five years later, Max still can’t get Eleanor out of his head or his heart. He has a single chance to make a second impression—one that will last forever.

Rule #1) Never bet on your own love life. Not if you actually want to have a love life, that is. Rule #2) If you only figure out that the lady is more important than the bet after you’ve made the bet, for pity’s sake, confess all, and quickly!

Of course, if heroes of romance fiction followed the above rules, readers of said fiction would be much the poorer for it. The misunderstanding that occurs before the opening of The Second Seduction of a Lady (and the reason there even needs to be a second seduction) revolves around just such a bet, and the heroine’s natural feeling of betrayal once it is revealed. Of course, she finds out after a night of grand passion, and from someone who is not exactly the hero’s best friend.

But that’s all in the past. A past that Eleanor Hardwick has tried her damnedest to forget, and that Max Quinton can’t help but remember. Particularly since Max is aware that the fault was his and only his.

Five years ago, Eleanor was a blue-stocking, almost but not quite on the shelf, her intelligence, and her unwillingness to pretend to be lacking any, causing her to be a wallflower. Max Quinton took the bet that he would kiss her before the week was out because he was just barely gentry, he really needed the money, and because he admired that intelligence the others derided.

He should have known from the first second that she was the only woman for him. He wanted all of her. And had her, for one night. Then she found out about the bet, and it was over.

Now she’s visiting her young cousin Caro in the country, and who does she see but Max Quinton. In the middle of nowhere, finishing the last days of his guardianship of Robert, the son of a friend.

And Max, not having learned his lesson the last time about deceiving Eleanor in order to get her, encourages Robert’s pursuit of Caro in order to provide him with a chance to seduce Eleanor a second time. This time he doesn’t plan on letting her go. No matter how many misunderstandings lay between them.

Max also doesn’t plan on Robert and Caro really falling in love, either. Just who ends up racing whom to Gretna Green?

Escape Rating B+: If you are looking for some delightfully whipped historical froth, The Second Seduction of a Lady might just be the right recipe to while away an hour or two.

Max and Eleanor are terrific characters, all the more so because neither of them are typical. Max has to work for a living, and Eleanor is not just a bluestocking, but she’s old enough to know her mind, and strong enough to voice her opinions. She also has just enough money to not need to marry. Her independence of the high ton is refreshing.  It’s also a nice change to see a Regency or Georgian romance where both the hero and the heroine are adults.

I would love to have seen a bit more of what happened Max and Eleanor’s first time around. There are just enough hints that the reader gets a good idea, but the story sounds delicious enough to warrant a full chapter or two of its own. 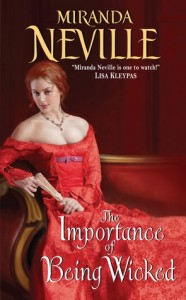 The Second Seduction of a Lady is the prequel for Miranda Neville’s new series. The first book in that series is The Importance of Being Wicked, and it will feature Robert and Caro’s story. It looks so much like more delicious fun that I just downloaded it from Edelweiss.

2 thoughts on “Review: The Second Seduction of a Lady by Miranda Neville”