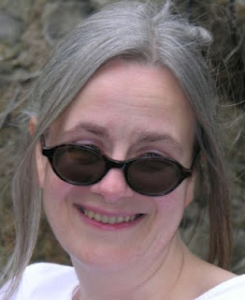 I’m very pleased to welcome Marie Treanor back to Reading Reality! I had the pleasure of interviewing Marie back in August for the publication of her Serafina and the Silent Vampire, and she’s back to introduce us to her Gifted series with Smoke and Mirrors. I’m loving Smoke and Mirrors so far, I’ll have a review up as soon as I finish this stage of my moving adventure.

But in the meantime, here’s Marie on why she created a new, paranormal country in the back of the old Soviet Republics.

One of the things I like to do in my writing is to set my fantastical story full of paranormal beings and magical happenings, in actual locations that I know well or have at least visited. For me, it grounds the unreal characters and events in the real world, and can add besides a pleasantly exotic atmosphere. 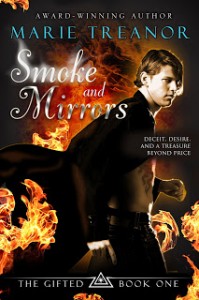 However, I confess I went a little off-piste in my latest book, Smoke and Mirrors. It does open in Edinburgh, Scotland, a city I lived in for several years, and moves across the river into the “kingdom” of Fife for a spell – also well known to me. But after that, the action shifts to the totally fictional ex-Soviet republic of Zavrekestan.

I had to make Zavrekestan up, because the country itself is very much part of the story – almost a character in its own right. I had this idea about an isolated country, poor and politically unstable, and outwardly not very interesting to outsiders, where paranormal activity abounds. One village in particular produces an amazingly high proportion of psychics. Within the country, the existence of the “Gifted” is an open secret, but they’ve survived the centuries without persecution or scientific study by not talking out of turn. Thus the Gifted can quietly help with the odd problem for their ungifted brethren and still remain an official secret.

However, how feasible would it really be to keep such a secret in this age of globalization, easy travel, and social networking? To say nothing of the world’s fascination with paranormal activity. So, at the start of Smoke and Mirrors, the secret’s starting to escape. A Russian soldier stumbled upon it during Zavrekestan’s war for independence, and, now a major player in organized crime, he’s determined to profit from it. Plus, my rebel hero, Rodion Kosar, has catapulted across the world, using his fire-gift in combination with his formidable intelligence, in order to rob banks and art galleries and other impregnable institutions, putting the Gifted’s secrecy at considerable risk. Add in the Scottish born daughter of a Zavrekestan refugee, who writes fiction about her own unacknowledged gifts of foresight, and things get a little explosive. 🙂

Anyway, my vision of Zavrekestan is of a large, mostly rural country made up of spectacular mountain regions, and vast plains and forests. A beautiful, mysterious place where the people speak a language that’s almost completely unknown outside its own borders. Politically, it’s drifted from one tyranny to another, so it has a dissident under-class and a powerful secret police force. Poverty has led to crime, and certain regions around the Russian border where even the police fear to tread. So, not a very safe country either, but I hope it’s as fascinating and exciting to readers as it is to me.

I thoroughly enjoyed “inventing” Zavrekestan, and like the actual characters, it seemed to grow as I wrote. In fact, I’ve just finished writing a first draft of the second book in this series, and I found myself learning even more about the country with each chapter. As if it’s not bad enough having your own characters tell you what to write, now I have a whole country at it!

So, if you were a Gifted Zavreki – maybe you’re telepathic, talk to the dead, heal by touch, dream the future, start fires with your eyes – would you keep it a secret, or tell the world? And why? 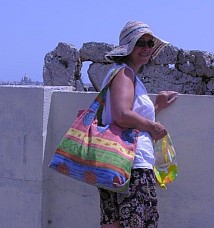 Marie Treanor lives in Scotland with her eccentric husband and three much-too-smart children. Having grown bored with city life, she resides these days in a picturesque village by the sea where she is lucky enough to enjoy herself avoiding housework and writing sensual stories of paranormal romance and fantasy.

Marie has published more than twenty ebooks with small presses, (Samhain Publishing, Ellora’s Cave, Changeling Press and The Wild Rose Press), including a former Kindle bestseller, Killing Joe. Blood on Silk: an Awakened by Blood novel, was her New York debut with NAL.

Connect with Marie on Facebook.
Subscribe to her Newsletter.
Join the party on her new blog: Marie Treanor’s Romantic Theme Party

Smoke and Mirrors by Marie Treanor (The Gifted #1)

Deceit and desire, and a treasure beyond price…

When struggling Scottish writer Nell Black accepts a one-off job with the police, translating for an arson suspect from the isolated ex-Soviet republic of Zavrekestan, she stumbles into a terrifying world of organized crime and paranormal abilities that turns her whole belief system upside down. Faced with an incomparable thief, hit men who spontaneously combust, gangsters, drug dealers, British Intelligence and a fiery goddess, Nell no longer knows who to trust. The man who saves her life is a criminal to whom deceit is second nature. He has more smoke screens and more plans in motion than anyone else can keep track of. He is, moreover, probably insane. Even his fellow gangsters are afraid of him. So why is he the one man Nell wants to touch her?

Rodion Kosar is in trouble. His convoluted plans all lead to one goal – the retrieval of his treasure – and to achieve that, he needs Nell to believe he isn’t the bad guy. He has many reasons beyond his own desires to make love to her. Especially when a plan goes wrong and he has to play dead before someone really kills him – either the police, the menacing Russian crime lord known as the Bear, or the powerful Guardian of the Gifted whom he’s defied once too often. Nell’s burgeoning gift of second sight could be his best route to the treasure, and yet keeping her with him spells danger. For Nell has her own agenda, her own mission, and she could just as easily cause his final downfall. 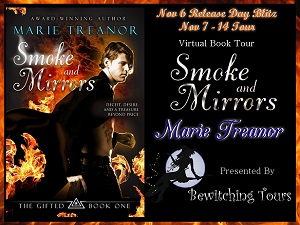