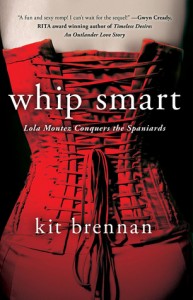 A wild and sexy romp through history based on the real-life adventures of the audacious, Lola Montez. It is 1842, London, and the gorgeous, ever-capricious 22-year-old Eliza Gilbert, (aka Lola Montez) is in deep trouble and seeks escape from a divorce trial. Desperate to be free, Lola accepts an alluring offer of a paid trip to Spain, if she will only fulfill a few tasks for Juan de Grimaldi—a Spanish theatre impresario who is also a government agent and spy for the exiled Spanish queen, Maria Cristina. Lola soon finds herself in Madrid, undercover as a performer in a musical play. But when she falls dangerously in love with the target, General Diego de Léon, Lola becomes a double agent and the two hatch a plot of their own. Disaster strikes when the plot is exposed, Diego is captured, and Lola is forced to flee on horseback to France, with a dangerous group of Loyalists in hot pursuit.

Lola Montez could be the real-life model for “The Perils of Pauline”, except that Lola’s perils had much more dire, and more far-reaching, consequences–and not just for Lola.

Lola Montez, nee Eliza Gilbert, may be the originator of the phrase, “feel the fear and do it anyway”. Or possibly “fools rush in where angels fear to tread”. She certainly doesn’t seem to have done much looking before she leapt.

It makes for a wild life. And a wild, adventurous story.

Stories told in flashback, like Whip Smart, do remove one element of surprise. The reader knows that the teller of the tale has survived every single hair-raising adventure. It doesn’t matter in Lola’s tale of self-invention. The whole thing is one grand death-defying romp through the back stages and bedrooms of Spain’s very real civil unrest in 1841.

But Lola became a spy because she wanted to escape England while her divorce was taking place. Then she got blackmailed by the Spanish spymaster. The sheer amount of foolish skullduggery on the part of the ringleaders would have been laughable, if it wasn’t so inept as spycraft. And it made Lola the perfect “patsy” when the plot failed. Which, of course, it did.

But, rather like another historic character that Lola resembles, the “unsinkable” Molly Brown, Lola escapes from the tragic death of her lover, the insane plotting of a double-agent, and finishes the story running off to another adventure, never looking back.

Escape Rating B+: Whip Smart reads like the best kind of melodrama, which in some ways, it is. There is never a dull moment in Lola’s life, because that’s the way she wants it to be. She invents herself, and she always looks ahead. It’s a life without much introspection, but she was running too fast for that.

Lola outruns the consequences of her actions. It’s the only way she stays alive. Of course, as the narrator of her own story, she may not be strictly reliable, but that’s what makes things interesting. She was a spy, albeit an unwitting one. She was also a courtesan, and an adventuress. And she loved being the center of attention. Of course she tells the story in such a way as to put herself in the best light. 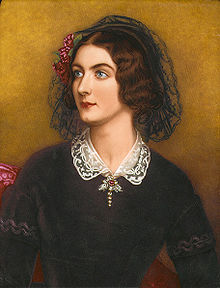 Whether Lola’s part in the history of Spain in 1841 really happened, is not clear, but Lola Montez certainly did exist. It is certainly reminiscent of things that she did, and fits with her established biography. Lola may even have been the inspiration for Sherlock Holmes’ Irene Adler and the incidents in A Scandal in Bohemia.

Guessing where the fiction and the history blends just makes the story that much more fascinating. Lola would have loved it.