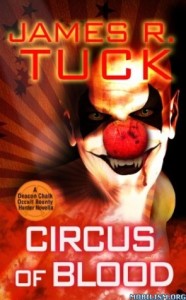 Anticipating the worst keeps Deacon Chalk a step ahead. But he never expected that a badly-beaten were-bat female victim would suddenly mutate and almost take him out. Or that the freak undead that infected her can’t wait to turn all lycanthropes into uncontrollable killing machines…once he’s gone. And that day is getting awfully close. Deacon may be outnumbered, out-gunned, and cut off from help, but what the enemy doesn’t know is that’s exactly when the world’s best bounty hunter lives up to his billing…

Deacon Chalk always gets his man. Or were-thing. Or vampire. If they’re on the side of evil. He does check things out first. Deacon may be a killing machine, but he’s one righteous killing machine.

And he usually makes one hell of a mess along the way. 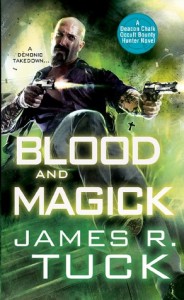 I wanted to catch up with Deacon, because the next full book in the Deacon Chalk Bounty Hunter series, Blood and Magick, is coming out in March and it’s on my “must read” list for the year. Deacon’s author, James R. Tuck, writes awesome between-the-books novellas that absolutely further the Deaconverse as a whole, so that put Circus of Blood on my reading agenda.

For the record, I loved That Thing at the Zoo and Spider’s Lullaby, even though I didn’t get around to writing reviews of them. Just so we’re clear. I wouldn’t want Deacon coming after me. I did review Blood and Bullets and it was sheer awesome.

Circus of Blood started off a bit gently for a story in the Deaconverse, but once it got going, it really pulled out all of the bloody and gory stops.

It begins with Deacon at a clinic for weres, and here’s there to help. Considering that Deacon is the bogeyman for most of the supe community, it is a bit of a different role for him.

The other thing that struck me as new was that Deacon was more upfront about the powers that the Angel who saved his life left him with. Well, Deacon saved the Angel first, then the Angel saved him. It’s part of Deacon’s backstory.

But, Deacon got a few extra-human powers from the exchange. He can sense supernaturals. In a room full of scared and sick weres, he feels everything. Kind of overwhelming.

He’s there to investigate the dumping of a were-bat into the middle of a road. Yes, I wrote that. It gets stranger. She got dumped from mid-air, vampire bitten up one side and down the other.

When Deacon shows up, she turns rabid. Not hyperbole, the actual disease. Then the situation truly goes pear-shaped.

Because it’s all part of a plot to spread rabies to the were-community and kill Deacon, perpetrated by a bunch of vampires. Of course it’s vampires.

And guess what? They’ve converted the performers in a circus, an actual circus! To make things worse, the vamps either started out as the freakier circus acts or turned themselves into the classically scary circus acts after conversion. Let’s just say that anyone who didn’t start out afraid of clowns, would leave with one hell of a case of coulrophobia.

To make sure Deacon fights “fair”, they’ve also trapped a whole tent-full of humans to be the audience.

Not fair, not fair at all. Can our hero save the day? Is there a book three in this series? Will you have all sorts of fun with the mayhem and destruction being wrecked on the denizens of evil?

Escape Rating B+: Circus of Blood is just on the good side of over the top. It shouldn’t be so much sheer fun, but it so is.

Deacon and his friends sling one-liners along with knives, guns, holy water and swords, and it just plain works. And the gallows humor will make you laugh when you least expect there could possibly be anything funny.

An occult bounty hunter, a priest, and a were-stoat walk into a circus…