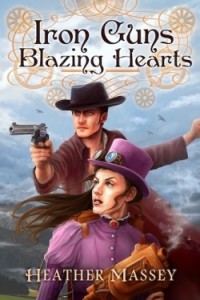 The West just got a whole lot wilder.

A woman on a mission… Scientific achievement isn’t enough for Violet Whitcomb. Life working alongside her renowned scientist father is filled with intellectual challenges, but what she truly craves is love and adventure. She’s resigned to a fate of academic pursuits…until a fateful trip across the American frontier changes everything. A rogue inventor known as the Iron Scorpion kidnaps Violet’s father and she alone is left to plan his rescue.

A man with a secret… Logan McCoy knows firsthand going up against the Iron Scorpion is suicide, but he can’t let Violet waltz into the villain’s lair alone. She may be a stranger, but she’s also the most compelling woman he’s ever known.

A perilous quest… Their attraction is undeniable, but their alliance turns contentious when Violet insists on including a third partner on their mission: her father’s latest invention and the world’s most advanced automaton, Arthur. The reason for Logan’s resistance isn’t clear until Violet comes face-to-face with the Iron Scorpion’s diabolical devices, and by then, it’s far too late.

CONTENT WARNING: An irresistibly dangerous alpha hero, a heroine whose most prized accessory is her steam gun, an automaton gunslinger…and a villain whose lust for power drives him to evils beyond the scope of humanity. 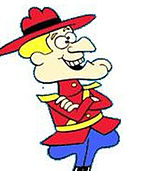 Partly it was the serial melodrama.  Violet Whitcomb yearns for adventure, so she reads about it in weekly magazines that provide it for her, one chapter at a time–always ending with the heroine in yet another dreadful scrape, seemingly doomed. (Did you ever wonder where the term “cliffhanger ending” came from?)

Violet is a bluestocking, an educated and intellectual woman, but her father sees her as just another tool to assist him in the creation of his amazing inventions. He has buried his grief at the loss of his wife (and Violet’s mother) in more and yet more work. But he’s prevented Violet from having any life at all. She’s in her mid-twenties, she’s happy to assist her father, but she also wants to have a chance at a family of her own. He doesn’t hear or see her as anything but an extension of himself and his work. He’s not mean, he’s just a workaholic.

On a trans-continental railway journey, Violet discovers the truth of the old adage “be careful what you wish for, you might get it”. A few moments of connection with a dangerous man on the train, a man she nearly throws herself at in her naivete, and then, without warning, the train is set upon by mechanical monsters.

Her father is kidnapped by one of those monsters. Violet’s dangerous and attractive fantasy man becomes her only hope for rescuing her father.

In all innocence, Violet assumes that this man on whom she has pinned all her hopes must be a Pinkerton agent. From her reading of adventure stories, that’s the romantic notion that makes sense to her imagination.

He calls himself Logan, and he reveals very little about his background. What he does say is that her father has been kidnapped by the Iron Scorpion. A man who has perverted the very ground on which he has made his base camp. The man who murdered Logan’s family.

They hammer out an agreement for Logan to guide Violet to free her father from the Iron Scorpion’s evil clutches only once they figure out that Violet’s father is exactly what the Scorpion has been searching for, a man who invents sophisticated automatons. The Scorpion has so fouled his own lands that humans are unable to work for him for very long.

Then Violet insists on bringing another partner. Her father’s finest creation, a fully-functional automaton that she calls “Arthur”.  (If the descriptions of Arthur don’t eventually make you think of Star Trek TNG‘s Data, especially from the episode A Fistful of Datas, I’ll eat my sombrero, or yours)

From the point where Logan, Violet and Arthur take up the trail to the Iron Scorpion’s lair, the story is adventure melodrama at its cheesy, gooey best.

The laconic Western hero with the mysterious past and the concealed motives who is doing the right thing for reasons of his own, but you just know they are not the reasons that they heroine thinks they are.

The naive heroine who has woven a beautiful fantasy about the hero that is doomed to go to smash sooner or later (probably sooner) and who is just so plucky that you hope she gets some of her happy ending. But you also want to shake some sense into her!

And the silent sidekick, who in this case is really, really silent!

But Snidely Whiplash was not half as villainous as the Iron Scorpion. Our heroes needed to be a lot more competent than their cartoon counterparts.

Will that be enough to save the day from a very evil inventor? Or will they need a more scientific boost?

Escape Rating B: There is more steampunk than romance in this steampunk romance. That’s okay, they were busy!

Having each chapter prefaced with a quote from one of Violet’s “adventure stories” was adorable. It showed where she was coming from as a character, and made the idea that she kept on believing that Logan was a Pinkerton agent a bit easier to swallow. She had led a rather sheltered life!

Arthur’s growth as a character and as a “person” definitely paralleled Data. Also Logan’s reaction to him. Logan first treats him as a “thing”, and finally at the end, treats him as an asset and acknowledges that they wouldn’t have succeeded without him. It’s a big leap.

I do hope that author does tell Arthur’s future adventures. Data was “fully-functional” after all.

This was fun and froth. It read as if it were one of Violet’s adventure stories come to life, which I think was the author’s intention. If there are more monsters out in this author’s version of the weird West, I’d be happy to read her tales of their vanquishing!

The Sunday Post AKA What’s on my (Mostly Virtual) Nightstand 5-17-15
Get Greased: Steampunk Reading Challenge