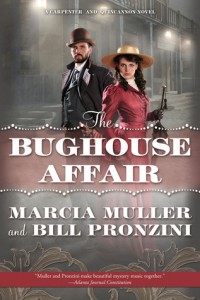 Sabina’s case involves the hunt for a ruthless lady “dip” who uses fiendish means to relieve her victims of their valuables at Chutes Amusement Park and other crowded places. Quincannon, meanwhile, is after a slippery housebreaker who targets the homes of wealthy residents, following a trail that leads him from the infamous Barbary Coast to an oyster pirate’s lair to a Tenderloin parlor house known as the Fiddle Dee Dee.

The two cases eventually connect in surprising fashion, but not before two murders and assorted other felonies complicate matters even further. And not before the two sleuths are hindered, assisted, and exasperated by the bughouse Sherlock Holmes.

At the beginning, it felt like I was missing something. Like any detective, I started to hunt for that elusive clue. But I didn’t hunt hard enough until after I’d finished the book.

I do enjoy the occasional mystery, and historic mysteries in particular. Marcia Muller and Bill Pronzini are both certified masters of their craft, but I had never gotten around to sampling either of their long-running series.

The Bughouse Affair, the first volume in their joint Carpenter and Quincannon series, seemed like the perfect opportunity to rectify my lack of experience with their work.

However, about that missing clue…this may be the first book in the series, but it’s not the first book with one of its protagonists. Pronzini has written three earlier John Quincannon books. And there’s an even earlier short story collection.

About this particular bughouse affair, we have a mystery within a mystery. Sabina Carpenter and John Quincannon are partners in a detective agency. This wouldn’t be so unusual, but the setting is gaslamp San Francisco of the 1890s.

Sabina Carpenter is Quincannon’s co-owner and business partner, not his life-partner. And she is a trained detective. Her history is as detailed as his. Carpenter was a female Pinkerton, a Pink Rose just like the very real historic figure Kate Warne.

Carpenter and Quincannon are hired to solve two seemingly separate cases. One is the case of a house-breaker who is methodically working his way down a list of the Great Western Insurance Company’s clients.

The other is a pickpocket, or dip, who is scaring away business at an amusement park.

And in the midddle of both of their cases is an English visitor to San Francisco who claims to be Sherlock Holmes. Is the crazy man interfering, or can he really solve either, or both cases? Or is he just getting in the way?

Escape Rating B: The portrayal of turn of the century life in San Francisco was absolutely riveting. Carpenter and Quincannon make a fascinating pair. They are equals, but Quincannon does have some problems with that. Not so much because Carpenter is a woman, but because he has difficulty believing that anyone is his equal. John Quincannon does not work well with others.

He also hopes that someday he and Sabina can be more than business partners. If that day is ever going to come, it is a very long way off.

The authors did a terrific job with dialog. The partners, and the police, used the 19th century words and phrases for all the ne’er-do-wells and criminals. Pickpockets were “dips”, safecrackers were “yeggs”. It added to the tone of the book and made the characters more “real”.

However, adding Sherlock Holmes into the mix took away from the building of the partnership between Carpenter and Quincannon. This was the period after Reichenbach when Holmes was in San Francisco, but while he is on-stage, reacting to his outsized personality overwhelms everyone else. 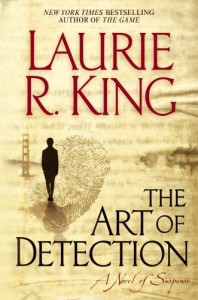 Laurie R. King handled Holmes’ visit to San Francisco as a lost manuscipt within her Kate Martinelli story The Art of Detection. By keeping the manuscript separate, she almost managed not to let Holmes overwhelm her Martinelli story. But it was a near thing even for her.

I hope that Carpenter and Quincannon have future outings in gaslamp San Francisco where they do not have to contend with interfering English consulting detectives. Their partnership will develop much better if they solve cases on their own.

One thought on “Review: The Bughouse Affair by Marcia Muller and Bill Pronzini”