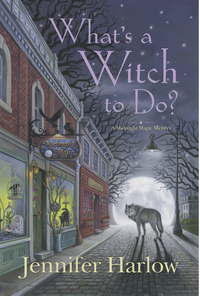 Mona McGregor is a heroine for the rest of us. She’s 35 years old, she’s not exactly gorgeous, and she’s not a size two. What Mona is, however, is responsible as hell.

Mona raised her younger sisters with the help of her grandmother. She owns her own shop. For the past 15 years, she’s been High Priestess of her local coven. Yes, you read that right. Her local coven.

Mona is a witch. Really. But then, so is a significant part of the population of Goodnight, Virginia. And a lot of the rest are werewolves. Some are vamps.

On top of all Mona’s other responsibilities, since her youngest sister abandoned them on her doorstep last year, Mona has been raising her two nieces, Sophie and Cora, ages ten and six.

What Mona has is the world’s longest to-do list and no life of her own. On top of everything else, someone wants to kill her in order to become High Priestess. If it weren’t for the fact that her death was required, Mona might be willing to give them the job just to get a few minutes peace!

About that death threat: she only finds out about it when Adam Blue, beta of the local werewolf pack, drops half dead on her doorstep. Adam is also gorgeous, and Mona would be interested, but Adam hasn’t spoken more than a half a dozen words to her in the twenty years they’ve known each other.

And, the doctor of her dreams has suddenly shown an interest.

There’s suddenly too much going on in Mona’s already overfull life.

The death threat gets backed up by a demon. The werewolf moves in as a bodyguard, and the doctor starts making moves.

What’s a witch to do? Suspect everyone!

Escape Rating B: There are two plots in this story, the death threat and the love story. Both have what mystery stories call a “MacGuffin” and both get resolved by the end.

Although the death threat is real, and is going to be accomplished by magical means, the reasons for it are actually mundane. I don’t mean mundane in the sense of ordinary, I mean mundane in the sense that they are the same as in any police procedural. The questions are “who has a motive?” and the classic “who benefits?” People are still people, even if they can make fire shoot out of their fingers.

The love story had a couple of twists. I think most readers will guess who the intended true love is before the end, and why. But the reasons do fit quite nicely into the world the author has created.

What we don’t find out about, and that I hope is resolved in later books in the series, is the story of Ivy, Mona’s youngest sister, and what the heck she dragged her little girls through. They picked up some stuff they shouldn’t, and some very adult fears and coping skills. There’s a story there.

So, both the mystery and the love story had their predictable elements, but the setting was fun, and I really liked Mona. I’ll be looking for another visit to Goodnight, VA. 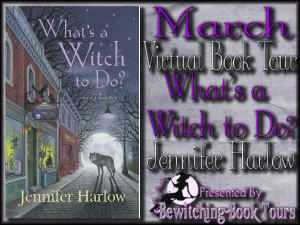 One thought on “Review: What’s a Witch to Do? by Jennifer Harlow”