Three months has been Gladie Burger’s limit when it comes to staying in one place. That’s why Gladie is more than a little skeptical when her eccentric Grandma Zelda recruits her to the family’s matchmaking business in the quaint small town of Cannes, California. What’s more, Gladie is also highly unqualified, having a terrible track record with romance. Still, Zelda is convinced that her granddaughter has “the gift.” But when the going gets tough, Gladie wonders if this gift has a return policy.

When Zelda’s neighbor drops dead in his kitchen, Gladie is swept into his bizarre family’s drama. Despite warnings from the (distractingly gorgeous) chief of police to steer clear of his investigation, Gladie is out to prove that her neighbor’s death was murder. It’s not too long before she’s in way over her head—with the hunky police chief, a dysfunctional family full of possible killers, and yet another mysterious and handsome man, whose attentions she’s unable to ignore. Gladie is clearly being pursued—either by true love or by a murderer. Who will catch her first?

An Affair to Dismember, and The Matchmaker series that it starts, seems like a match designed to appeal to fans of Janet Evanovich’s Stephanie Plum series. It has the same madcap sense of humor, some of the same family dynamic, and a very similar romantic triangle.

But at least so far, Gladie, short for Gladys, Burger, has a chance of avoiding some of the ennui that plagues long-time readers of the Plum books. At least I have hope.

Gladie has come back to Cannes, California to apprentice with her Grandmother Zelda in her matchmaking business. Any resemblance between Zelda and Stephanie’s Grandma Mazur is intentional but superficial.

For one thing, Zelda the matchmaker may have a terrible case of agoraphobia but she otherwise still has full possession of every single one of her marbles. Plus a few extra, as she quite definitely has a supernatural gift for matchmaking. And she’s got a Ph.D. in the study of human nature.

Gladie’s got the family talent, but most of it seems to lie in another direction. Instead of finding perfect matches, it turns out that Gladie has an instinct for finding murderers. A talent that lands her right in the path of Cannes’ commitment-phobic, but incredibly handsome, new chief of police, Spencer Bolton.

Because there has to be a triangle, Gladie’s next door neighbor is also a handsome, single hunk. The odd thing about the hunk next door is that no one in town seems to know exactly where Arthur Holden came from or what he does. They only know that he’s gorgeous.

No one ever gets murdered in Cannes. That’s why Spencer Bolton decided to become the police chief. He saw too much death as a cop in LA. But then Gladie moves in and suddenly old men start dropping like flies, always in mysterious circumstances.

Gladie can’t help herself, she has to investigate. And neither Spencer nor Arthur can help themselves, they can’t stop going after Gladie, if only to see what happens next!

Escape Rating B: An Affair to Dismember should have a sticker on it: “for a good time, call Gladie at 555-1212” or something like that. Gladie is tons of fun. Not much sense, but absolutely a giggle-fit.

There is one thing that drove me crazy, and needs to stop. Gladie needs to stop fat-shaming every three paragraphs. She worked in a health food store before she moved in with her grandmother and was apparently a size 0. She’s gained 10 pounds and rags on herself every 10 minutes about it, always while eating or talking about food. But the one time she puts on a dress, every man who sees her starts to drool, and every woman who sees her literally turns green with envy. As Grandma Zelda would say, “Enough already!”

Someday, there will probably be a romance, either between Gladie and Spencer, or betweeen Gladie and Arthur. I hope, for everyone’s sake, the author doesn’t drag it on through 19 books. That level of indecision would be much too much. Gladie does deserve the chance to try them both out, as far as this reader is concerned. That could be loads of fun.

The mystery was just screamingly funny. Gladie was learning how her gift worked, so she made lots of mistakes. And it made for terrific excuses for Spencer or Arthur to butt in and/or rescue her. Gladie never claims to be a professional anything, so her errors are mostly funny. We haven’t reached nearly the point where we think she should know better. She’s new. 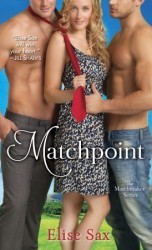 Based on An Affair to Dismember, The Matchmaker has the potential to be a terrifically fun and funny light mystery series. I’m definitely looking forward to Matchpoint in July!