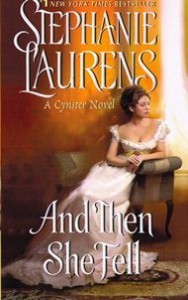 The only thing more troublesome than a Cynster man…is a Cynster lady who belives love is not her destiny. Famously known in London society as “The Matchbreaker,” Henrietta Cynster’s uncanny skill lies in preventing ill-fated nuptials – not in falling victim to Cupid’s spell.

But then she distrupts one match too many and feels honor-bound to assist dashing James Glossup in finding a suitable bride for a marriage of convenience.

A task infernally complicated by the undeniable, unquenchable attraction that flares between James and Henrietta, who continues to believe she will never fall…

And Then She Fell is the first one of Stephanie Laurens’ Cynster books that I’ve read in some time. But like many readers, the earlier books in the series are among my favorite Regency romances ever. I was very curious to see how much I would miss not having read the ones in the middle. And whether I would go immediately hunting through my shelves to find them! 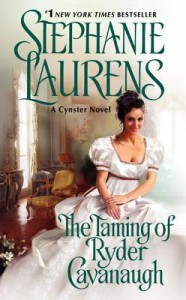 And Then She Fell is the story of Henrietta Cynster, the next-to-the-last Cynster female of her generation. Which does mean there is one more female, and one more book (The Taming of Ryder Cavanagh) in this particular cycle.

Henrietta is mature for a Regency heroine at 29, and I like her for it. She’s sensible and knows what she does and doesn’t want out of life. She’s no giggling, simpering miss. Even though she’s not sexually experienced (she’s unmarried and that would be very much out-of-character) she is intelligent and otherwise knowledgeable about the ways of her world. She doesn’t hold back on her opinions and she knows very well how to use the influence she has as a member of the illustrious Cynster family.

She’s earned a well-deserved nickname as “The Matchbreaker”. Young ladies of the ton come to her to investigate the true motives behind their suitors’ courtship. Henrietta delivers the goods. Not malicious gossip, but absolute facts. She doesn’t just break matches, she also makes them.

The story begins because her friend Melinda has requested an investigation of her suitor James Glossup’s motivation behind his courtship of her. Melinda desires a love match. James has another motive entirely. His great-aunt’s will left him a landed estate, but reserved the capital required to maintain it unless he married within one year of her death. James is wealthy enough to keep himself and a wife quite comfortably, but not to take care of all the tenants that he feels responsible for. Unless he marries in time, he’ll have to sell the estate. He was not honest with Melinda about his motives so Henrietta tells her friend that James would not suit her.

This leaves James with less than a month to find a bride. Complicating matters, James and her brother Simon are best friends. He’s a good man, he just has a big problem.

Henrietta the matchbreaker feels some responsibility for his predicament. The ton will know that she pronounced judgement on his unsuitability, without knowing the reason why. So she agrees to help him find a wife.

But the more time they spend together, the more they realize that the only match that needs to be made, is one between themselves.

However, Cynsters only marry for love. And that was not what James was initially offering. He will need to convince Henrietta that he has changed his mind. Or rather that his heart has truly become engaged in a suspiciously short period of time.

All while trying to protect her from mysterious attempts to take her life, for a reason that no one seems to be able to determine.

Have they left it too late?

Escape Rating B: And Then She Fell is a well-told addition to the Cynster saga. Henrietta’s position as “The Matchbreaker” makes her different from the usual run of Regency heroines, as does her position as a late-20’s woman who is not a widow and not a wallflower. She’s interesting in her own person, and not just as another Cynster. (Not that the Cynsters aren’t plenty interesting all by themselves!)

James Glossup was not particularly different from any other Regency male, at least as seen in this story. There are references to his having been a “wolf”, but in this outing he seems relatively tame. His “wolfish ways” might have been more apparent in some of the stories I missed.

The wonderful thing about the Cynster series is that it is terrific to see the members of the clan again, however briefly. One of the great things that happens is that when there is trouble, and there inevitably is trouble, the hero or heroine is not alone. She, or he, has all the resources of this marvelous family at their disposal. Henrietta needs help, and the Cynsters deliver. One of the best parts of And Then She Fell is that when Henrietta needs assistance, she calls on the Cynster women, and not the men, to come to her aid. And they deliver!

There are so many Cynsters that the family tree in the front of the book is absolutely required!

The mystery in the story concerns the identity of the man trying to kill Henrietta, and his true motives. The author did a pretty good job concealing the who and the deeper parts of why until the very end. Well done! 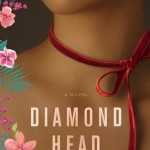 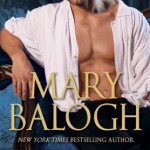 Review: The Arrangement by Mary Balogh

2 thoughts on “Review: And Then She Fell by Stephanie Laurens”