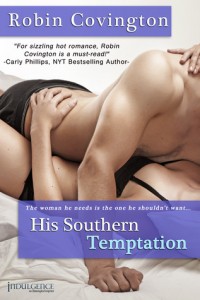 As a Black Ops assassin, “Lucky” Landon has had more than his fair share of close calls. Now he’s turned in his sniper rifle for the simple life of his small hometown. So the last thing he ever expected was to end up at gunpoint. Or that the woman holding the gun would be his best friend’s little sister and Lucky’s on-again/off-again lover.

Taylor Elliott is Trouble, and she likes it that way. And seeing Lucky again? Well, he’s been her dirty little secret for the past few years and everyone knows that secrets in a small town are almost impossible to keep. But Taylor has bigger problems on her plate. Like the local mob boss who wants her dead.

Lucky Landon and Taylor Elliott meet again at gunpoint. Not that they haven’t met before in various compromising positions–this is just the first time that firearms have been involved.

And the first time they’ve entertained the possibility of hooking up in their home town. A typical small Southern home town where everybody knows everybody’s business the second there’s a whisper in the air.

A place they’ve both steered well clear of from the moment they were each old enough to see it in their respective rear-view mirrors.

But neither of them is an eighteen-year-old kid anymore. Lucky has spent more than a decade doing “wetwork” for the U.S. Marines. The special ops he’s been on are part of the shadow war that he can’t reveal to anyone, the kind that leaves a stain on a man’s soul.

The rare times he’s hooked up with Taylor over the years have been his only slice of heaven, his bit of redemption. He’s given the U.S. Marines all the soul that he can stand to give, and he’s come home to heal what’s left. He wants a real relationship with Taylor, instead of being just her dirty secret.

Taylor has spent her time as far away from the South as she could get. Her family wanted her to do something with her education. Instead, Taylor became a massage therapist and aesthetician. She’s on her way to owning her own business. In Hawaii. She’s also the wildest and most adventurous woman Lucky has ever met. What she won’t do is have a real relationship, not with him, not with anyone. She doesn’t want to let her emotions get involved.

The one and only time before she let herself fall for a man, she found out he was screwing the wedding planner. On the day of the wedding. She ran out of the ceremony and never looked back.

Her mother thought she should have forgiven the bastard. Which probably says all there is to say about Taylor’s relationship with her mother. And Taylor’s parents’ broken marriage.

Taylor left that ceremony by stealing Lucky’s car. He never pressed charges, because he loved her then. He loves her now, but the trick is getting her to deal with that. All while chasing a mobster who seems to have Taylor in his sights.

Just how Lucky is lucky, after all?

Escape Rating B: This sequel to A Night of Southern Comfort (reviewed at Book Lovers Inc) has all the chemistry and heat of the first story and all the fun with a slightly more plausible plot. 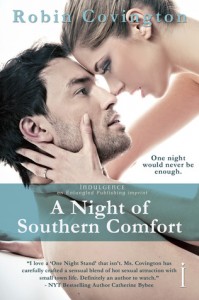 His Southern Temptation also has the slightly goofball suspense element that characterized the story of Comfort, but the characters in Temptation are more believable, which made the story work better for me.

Lucky’s just plain done with the military. He’s served more than honorably, and has earned his peace. Working with his friend Beck to solve a missing persons case looks like a way of helping a friend using some of his skills. Then Taylor gets involved and everything goes pear-shaped.

Both Lucky and Taylor have problematic relationships with their parents that contributed to both of them leaving home, and in Taylor’s case, definitely factor into why she is so gun-shy about relationships. Her mother didn’t just give up everything to support her father’s career, she constantly needles Taylor to make sure Taylor doesn’t do the same thing. And intentionally or not, tells Taylor what a disappointment she is. Taylor feels compelled to succeed alone, to prove her mother wrong.

But Lucky is an addiction that Taylor can’t seem to give up. It just takes her a long time to stop listening to her mother and figure out why.

One thought on “Review: His Southern Temptation by Robin Covington”