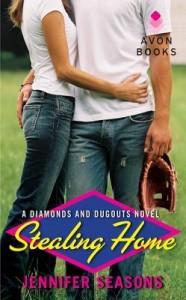 Love may be just a game, but the baseball players in Jennifer Seasons’ sexy Diamonds and Dugouts series—they’re playing for keeps!

Mark Cutter has it all: a lucrative baseball career, fast cars, and faster women—and all thanks to his priceless good luck charm. At least, that’s what he thinks before Lorelei Littleton shows up. Next thing he knows, he’s waking up alone, the sexy brunette has vanished, and his good luck charm is gone. More than a little curious about the wicked-hot cat burglar and determined to get his property back, Mark’s going to track down the thief and make her pay—big time.

Maybe Lorelei feels a tiny bit guilty for stealing Mark’s good luck charm, but when it’s worth $100,000 and the money could save her niece’s life? She’s not losing sleep over it … but him? Lorelei can’t get the ballplayer with the bad attitude out of her head. And now he’s come after her with more than just revenge in his eyes. Lorelei has a choice: turn over the charm and lose the money, or keep it and risk losing everything … including her heart.

It’s April and that means baseball season is just around the corner.

When the “boys of summer” start to play, can baseball romances be far behind?

Lorelei Littleton and Mark Cutter are both trying to steal home in Jennifer Seasons’ first trip at bat in her new Diamonds and Dugouts series. It’s just that neither of them starts out thinking that way.

Mark Cutter is the star catcher for the Denver Rush, the fictional Major League Baseball team based in, of course, Denver. Cutter is still young, but old enough to have gotten tired of the traveling life of late nights, lots of parties, and very easy plastic bimbos. Especially since his ex-wife used to be one.

He’s starting to hunger for something real, he just doesn’t know it yet.

Lorelei Littleton has way too much real in her life. A lot of very real medical bills and nowhere near enough money to pay them with.

Her beloved niece needs a life-saving open heart operation, and Lorelei’s brother doesn’t have medical insurance to cover it. That’s not all. He’s still paying for his late wife’s medical bills after her death, and his own surgery. There’s nothing but pain and tragedy there.

Logan’s done his best, but rodeo riders are bad health risks, especially with only one kidney. His life sounds like one of those sad country music songs.

Lorelei’s answer is to do something dangerous, and maybe live a little. Mark Cutter’s ex-wife wants someone to steal Cutter’s good luck charm. She says she’ll pay a cool $100,000 for it. That’s enough money to pay for her niece’s surgery.

What Lorelei doesn’t count on is the charm of the man she’s supposed to steal from…and that there is a very good reason Mark Cutter divorced the witch.

But his ex has finally done something good for him after all the pain she caused him…she sent this luscious would-be thief into his life. Lorelei is the most real woman Mark Cutter has seen since he became a star player. He’ll do anything to keep her near him. She’s his new good luck charm!

Escape Rating B-: The story all hinges on a series of misunderstandammits, and they are doozies! Mark’s ex-Dina lies like the proverbial cheap rug to Lorelei to get her to steal from Mark. That’s the one lie that makes sense. After that, the story keeps going based on Mark and Lorelei never telling each other anything resembling the truth.

It wouldn’t work at all except they are so hot for each other they can’t make themselves keep away, even when common sense says they should. The enemies-into-friends angle manages to work.

Both Mark and Lorelei have pretty big secrets. Lorelei hides that she’s doing this in order to get money for her niece’s surgery. Mark’s problem is his insecurity about his dyslexia. He’s hidden it all his life, and he’s very afraid to trust anyone. His last experience at trusting someone ended in divorce, so he’s pretty gunshy.

At the same time, everyone around them knows they are falling for each other. Her need for the money, and his need to keep his new good luck charm around give them both an excuse to stay together when logic would say otherwise.

This one is for people who like hot sports romances, especially about baseball players. It was fun and frothy, just like the mochas that Lorelei loves to drink.