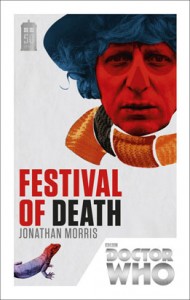 Stuck in the end of a hyperspace tunnel lies a huge, chaotic, space city known as the G-Lock — the end product of the most terrible intergalactic traffic jam in history. It has now been transformed into a death-themed park, where the major attraction is a death-simulator known as the Beautiful Death. However, the power generated by people enjoying the ride is being diverted to a mysterious destination. A creature called the Repulsion is on the loose, offering resurrection in two hundred year’s time to anyone who will surrender to it, allowing it to exist in the real world. Can the Doctor defeat it, and escape from the G-Lock before the interface between hyperspace and real space collapses? 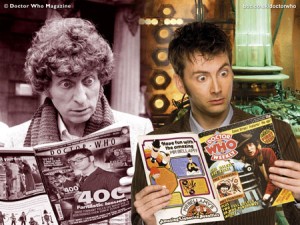 And Romana is threatening to withdraw the Doctor’s TARDIS-driving privileges if he can’t pass his time travel proficiency test.

Care for a jelly baby? 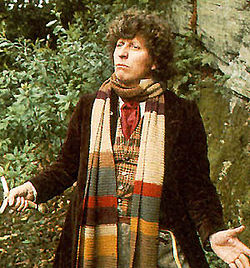 If you never forget your first Doctor, then the Fourth Doctor was my Doctor. All teeth and curls with his incredibly long scarf and floppy hat.

Before the Time War made even the thought of worrying about passing any exams back on Gallifrey completely pointless–because Gallifrey is gone.

Festival of Death is very much a Fourth Doctor story. The Doctor is always running into trouble, and expecting that Romana and/or K-9 will get him out of it. He generally thumbed his rather large nose at any authority, but he was usually right about questioning the rules. And he usually did get arrested very quickly upon arrival. If he didn’t deserve it at the time, he generally did later.

In this story, there are a lot of points where the thing he’s being arrested for is something that he hasn’t done yet. At least from his perspective. Back to the timey-wimey stuff.

The story at heart is about the conundrum of “knowing then what you know now” and living life over. One alien race has that ability. One man has been systematically experimenting with those aliens in an attempt to re-live his life, in the hopes of erasing his past mistakes.

The First Law of Time Travel is not that forgiving. 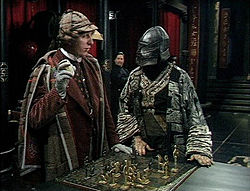 Escape Rating B: Reading Festival of Death made me want to go and watch some of my favorite Fourth Doctor episodes like The Talons of Weng-Chiang or Pyramids of Mars.

I enjoyed the story, but it reminded me of a couple of things; one, that it’s impossible to forget what came after: the Time War and the death of the Time Lords, and two, that books like this are for fans of the series. I can’t imagine coming into this cold.

Also, Romana was not my favorite companion of this Doctor’s, Give me Leela or Sarah Jane any day.

But it was great fun to go back and relive my Doctor’s adventures. I’d forgotten just how much of a treat these books can be!

4 thoughts on “Review: Doctor Who: Festival of Death by Jonathan Morris”