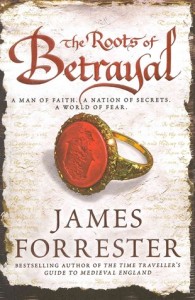 Your Choice. Your Faith. Your Fate.

1564: Catholic herald William Harley, known as Clarenceux, guards a highly dangerous document. It’s a manuscript he’d rather not have—destruction and death have followed in its wake. But things get much worse when the document is stolen, and he plunges into a nightmare of suspicion, deception, and conspiracy. As England teeters on the brink of a bloody conflict, Clarenceux knows the fate of the country and countless lives hang in the balance. The roots of betrayal are deep and shocking, and the herald’s journey toward the truth entails not just the discovery of clues and signs, but also of himself.

“The roots of betrayal lie in friendship; those of treason lie in loyalty.”

This quote could easily sum up this second volume of the trials and tribulations of William Harley, the Clarenceaux King of Arms. When you read the line, it seems so obvious, as if it should be a common saying.

Imagine my surprise to discover that the fiction author James Forrester was quoting himself (as historian Ian Mortimer) from his book The Greatest Traitor. It doesn’t make the words seem any less self-revealing, or any less “true” in the case in William Harley.

The lesson of Clarenceaux’ story could be taken as “keep your friends close and your enemies closer”, although the man seems to have a difficult time determining which are which.

And, to use our vernacular instead of his, if it wasn’t for bad luck, he wouldn’t have any at all.

History remembers the Elizabethan Age (maybe we should be calling it the First Elizabethan Age) as a Golden Age. England defeated the Spanish Armada. Shakespeare’s career flourished. Elizabeth’s reign was the time of England’s glory.

But we forget that it didn’t begin that way. Elizabeth’s reign had a shaky start. There was a significant amount of religious dispute between Catholics and Protestants. Many wanted a return to Catholicism, and fomented revolts in favor of Mary Queen of Scots, Elizabeth’s putative heir.

The problem with Elizabeth being the “Virgin Queen” was that virgin queens have no children to inherit their thrones. 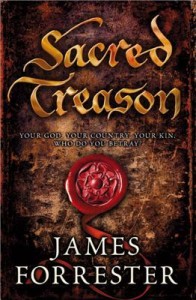 Into the middle of this we have the roots of William Harley’s betrayal. In Sacred Treason (reviewed at Book Lovers Inc.) Harley is entrusted with a document proving that Queen Elizabeth was illegitimate because her mother, the executed Anne Boleyn, was pre-contracted to Henry Percy. (This was a big deal in the 1500’s)

At Anne’s trial, this was one of the many charges, but there was no documentary evidence.

There are conspirators who demand that Harley use the document to start a pro-Catholic rebellion. Harley, although he is Catholic himself, refuses. He is wise enough to know that rebellions only lead to death and repression.

Then the document is stolen from its hiding place in his house. Harley believes that he has been betrayed. But by whom?

Every single person who has ever known about that document operates on the belief that someone has betrayed their trust. Clarenceaux is certain that the widow Rebecca Machyn, his partner in misfortune in Sacred Treason, has betrayed him. Francis Walsingham, an agent of the crown, is certain that Harley has betrayed the government and is working for towards a Catholic conspiracy.

Where is the document, and why was it stolen? Who is at the heart of what conspiracy? Where is the betrayal? How many betrayals are there?

Escape Rating B+: The Roots of Betrayal was every bit as much of an immersive experience as Sacred Treason. In some ways, it was better. Part of the emotion of Sacred Treason required following along with William Harley’s falling slightly in love with Rebecca Machyn, and that part didn’t work.

The Roots of Betrayal is a story of honor and betrayal. Political conspiracies and political paranoia. Lies and deceit. This time, Harley follows Rebecca because he thinks she’s stolen this document and he’s afraid for his life and the lives of his wife and children. He knows what happened last time. His house was ransacked, his possessions were destroyed, his family had to flee London. He was nearly killed.

He’s also correct that a rebellion will only end in repression and death, not just for the rebels themselves, but anyone who might be thought to be sympathetic. If the rebels are Catholic, then what little tolerance currently exists will be ruthlessly suppressed, probably in blood.

His chase leads him through dark places. He forgets everything but his need to find that document and prevent anyone from using it. He finds more honor, for certain strange definitions of that word, among thieves and pirates, than he does among supposedly ladies and gentlemen.

Sacred Treason fascinated because of the political plotting. The Roots of Betrayal is almost a “road novel”. In his desperation to find the document, Clarenceaux leaves behind his comfortable, middle-class life and finds himself in more and more desperate straits at ever turn.

The people he meets along his journey are what push the story, and the reader, forward. Each time he learns of another link in the chain, he meets a new group of amazing characters. Each person’s agenda layers on top of, or thwarts, his.

The idea that pirates have more honor than supposed gentlemen is one that sticks with you when you’re done.