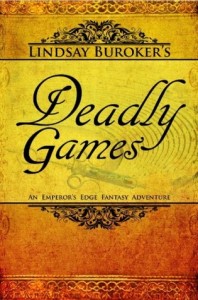 When you’ve been accused of kidnapping an emperor, and every enforcer in the city wants your head, it’s hard to prove yourself an honorable person and even harder to earn an imperial pardon.

That doesn’t keep Amaranthe Lokdon and her team of outlaws from trying. When athletes start disappearing from the Imperial Games, they may finally have an opportunity to show the emperor that they’re on his side. If she and her comrades can get to the bottom of such a public mystery, they’re sure to get the credit.

But plans go awry when Amaranthe’s own men start plotting against each other, the new ally she’d hoped to acquire tries to turn her in, and her best fighter–and closest friend–disappears.

Maybe getting involved wasn’t such a good idea after all… 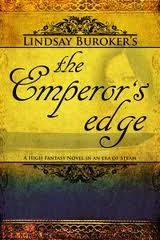 Deadly Games gets off to a slightly slower start than the first two books in the Emperor’s Edge series (see my reviews of The Emperor’s Edge and Dark Currents) but it’s the same type of slowly as those last few feet of clanking you hear on a roller coaster just before it gets dragged over the top of the first, highest peak on its track and goes careening down the other side in near-freefall.

Once this story gets going, the stomach-clenching, twisting and turning action never stops. The reader can also feel the places where the story kind of “bends” onto a slightly different path, and the whole fantastic construction of the series shifts from just being a glorious adventure to something more serious and, well, deadly.

In the background, you see the long game being played. Amaranthe and her band may be pawns on someone else’s chessboard. We won’t know until the future books play themselves out.

But in this story, there is an event like the Olympics, and people are being kidnapped. Athletes who otherwise have nothing in common besides the games are turning up missing. Amaranthe gets involved because it’s the right thing to do, not because there’s a job in it.

Speaking of games, someone is impersonating Sicarius, and drawing what you would think would be life-limiting attention from the Enforcers.

Oh, and Maldynado keeps trying to set Amaranthe up on a blind date with one of his warrior-caste friends. Not only is Amaranthe embarrassed by this matchmaking assistance, but her “date” keeps trying to get her arrested. There are a couple of bright spots that come out of this particular charade.

The question, as usual, is whether Amaranthe will live long enough to enjoy them.

Escape Rating A-: This installment in the series takes a bit to really get going, possibly because it starts while the gang is on vacation, so there’s a flavor of “getting the band back together” after downtime.

Also, it felt like more of the action than normal took place with the group split into different factions, and the narrative had to switch back and forth. I think this was intended as Basilard’s story, or it felt that way. His issues with his past are the ones that get resolved in this book, even though the long arc is Amaranthe and Sicarius’ story.

The focus this time is on Amaranthe and Sicarius strangely developing relationship; on Basilard’s acceptance, or lack thereof, of the things he had to do to survive; and on Maldynado’s continuing to be Maldynado. Mal may also be growing up a bit, although that’s a really long journey. It’s probably longer than Amaranthe and Sicarius getting to the point of having a relationship, and that’s saying something!

Books and Akstyr take a backseat in this book, and that’s okay. This story has a lot to juggle without keeping all of them in front all the time. 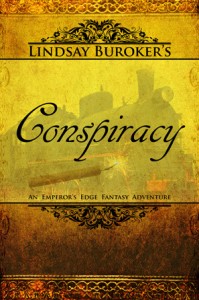 There was no easy solution this time. They solved the “case”, but found as many questions as they did answers. The ending left me chomping at the bit to start the next book, Conspiracy.

I have a nasty feeling that they will have more than one conspiracy to deal with. Their luck just seems to run that way. Bad. Awful for them, but compelling to read.