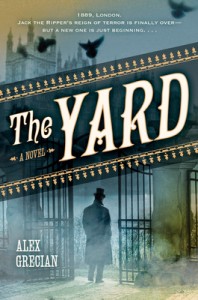 JACK THE RIPPER’S REIGN OF TERROR IN FINALLY OVER, BUT A NEW ONE IS JUST BEGINNING.

Victorian London—a violent cesspool of squalid depravity. Only twelve detectives—The Murder Squad—are expected to solve the thousands of crimes committed here each month. Formed after the Metropolitan Police’s spectacular failure in capturing Jack the Ripper, the Murder Squad suffers the brunt of public contempt. But no one can anticipate the brutal murder of one of their own…

A Scotland Yard Inspector has been found stuffed in a black steamer trunk at Euston Square Station, his eyes and mouth sewn shut. When Walter Day, the squad’s new hire, is assigned to the case, he finds a strange ally in Dr. Bernard Kingsley, the Yard’s first forensic pathologist. Their grim conclusion: this was not just a random, bizarre murder but in all probability, the first of twelve. Because the squad itself it being targeted and the devious killer shows no signs of stopping before completing his grim duty. But Inspector Day has one more surprise, something even more shocking than the crimes: the killer’s motive.

Jack the Ripper changed the world. He wasn’t the first serial killer, but he was the first one to create the kind of worldwide media frenzy that we are only too familiar with today.

The Ripper created the type of spectacle that the media loves, in an era when the newspapers (think of that, newspapers) were only just discovering the power of the press to sensationalize.

When Jack wasn’t caught, that frenzy turned on the Metropolitan Police. The late 1880s were the very dawn of forensics and investigative techniques. No one was prepared to profile a serial killer. But the press howled for a scapegoat, and the public lost confidence in the police. 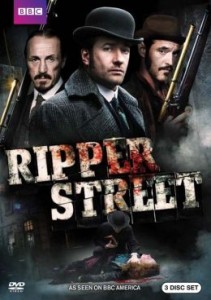 (If you’ve ever watched the TV series Ripper Street, this is the same time period. Not only does it give you a terrific picture of the setting for The Yard, but Ripper Street is just plain awesome. Dark, but awesome.)

The story of The Yard is a murder investigation. After the Ripper killings, this Scotland Yard created not merely what 21st century police would call a Homicide Division, but a Major Case Squad within that division. In other words, a “Murder Squad”.

Their first serious case is the murder of one of their own: a Detective Inspector is found stuffed into a steamer trunk in Euston Station, with his eyes and mouth sewn shut. It is going to be Detective Inspector Walter Day’s first major case since he was promoted to Inspector and moved to London from Devon.

No one is sure he is up to the job, including himself. Because the killer is after him. At least, one of them is.

Escape Rating A: The Yard is an amazingly well put together story. It’s a historic mystery, and it’s a police procedural at a time when that police procedure was being invented. Forensics compared to what we know now were pretty minimal. Reading the story of this “Murder Squad” being created as it solves its first cases is awesome.

As a police procedural, this is a “cop shop” book. Grecian brings the work of the police to life. Even though this is a different era from our own, they still feel like police. A lot of the grunt work is the same, even when technology is non-existent.

The characters were people that you wanted to follow. In this story, those are mainly the men, because women weren’t police in the 19th century, but the glimpses of their backstories have depth. One of the fascinating characters is the pathologist, Dr. Kingley, who seems to be running the entire forensic pathology department as a one-man-band on his own time and his own dime (or shilling).

But the two members of the Murder Squad itself are the people whose eyes we see through. Walter Day, who is new to London and isn’t sure if he should be there, and Constable Hammersmith, who got himself out of the coal mines and was made to be a copper.

Not only are the characters incredibly well-drawn, but the research into the period is meticulous. Grecian has brought the gaslight era back to life in The Yard. 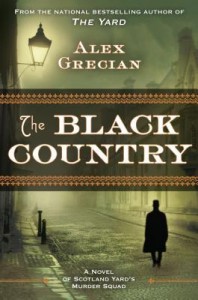 Right now, I’m trying to figure out why I let the ARC of The Yard sit around since last June. It was on my 2012 most anticipated list, but when I got it I didn’t get around to reading it until now. I’d be kicking myself harder but Murder Squad #2, The Black Country, just came out this month. I can jump right in!

If this sounds like your cup of tea, or if you’re interested in an alternative investigation of the Ripper case itself, try Lyndsay Faye’s Dust and Shadow.