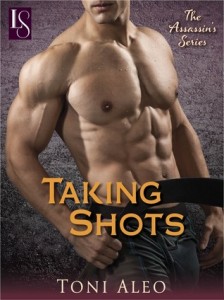 No matter how hard she tries, Elleanor Fisher never thinks she’s good enough, from her job to her weight to her love life. After enduring years of abuse at the hands of an ex-boyfriend, Elli has been drifting through life in a daze. Until, that is, she meets Shea Adler on a promotional shoot for the NHL’s Nashville Assassins. Before Elli knows what’s happening, the gorgeous Shea breaks the ice and shatters her world.

A brilliant athlete inside the rink, Shea Adler is tired of the life he’s living outside of it: the women, the money, the drinking. But everything changes when he meets Elli. After laying eyes on this feisty, witty, beautiful woman, he feels like he’s just taken the hardest hit of his life. No matter how skeptical she is, Shea knows they are meant to be together—if only he can convince Elli to put her insecurities aside before she misses out on a shot at love.

I picked up Taking Shots (and book 3 in the series, Empty Net) from NetGalley because the novella, Falling for the Backup was sent to me to review for Library Journal. I hate starting series in the middle, even though I know that readers regularly pick things up without knowing there are previous books. If I know, I just can’t make myself do it.

The Nashville Assassins are a Stanley Cup winning hockey team based, of course, in Nashville, Tennessee. (There is an actual Nashville team, which surprised me, they’re the Nashville Predators.) But still, the story couldn’t be based on a real team. It did drive me a bit nuts that the Cup was almost always referred to as the Lord Stanley Cup. That may be the official name, but you almost never hear it. The thing my old hometown Chicago Blackhawks won recently was the Stanley Cup.

About the story. We have Shea Adler, one of the premier defensemen for not just the team, but for the league, who is staring down 30 and realizing that a succession of one-night-stands with plastic Barbies might not be enough anymore. Or that it won’t be when he retires someday. Not soon, but someday. His twin sister is married and has two beautiful children and a very happy life he’s starting to envy.

In walks the photographer for the team photoshoot, and he’s smitten by a very real woman with very real issues. Elli Fisher owns the premier photography studio in Nashville. Her business is booming. She’s also a lifelong hockey fan. Taking the promo shots for the team is a dream for her, and she did pull a few strings to get the job, not that she didn’t have strings to pull; her uncle owns the team.

Elli is no plastic Barbie, she’s a very real, and very insecure size 10 or 12 woman in what feels like a size 0 world. And does she ever have issues about that, along with everything else except her business. Her business may be the only thing she’s secure about.

And that’s the story. There’s an instant attraction between Shea and Elli, that Elli can’t believe is real. She has been so beaten down by her family, by an abusive ex, and by a chronic illness, that she has no faith that any man could possibly be attracted to her again.

Shea decides she’s worth an inordinate amount of time and patience, while Elli takes out pretty much every bad thing that has ever happened to her on him. He pays for all of her past pain.

And I wish she had bitch-slapped her mother a lot sooner.

Escape Rating C+: On the one hand, I couldn’t put this thing down. All 500 pages of it. There’s a soap opera element to it that kept me from stopping. I just couldn’t believe Elli’s family.

There’s no question that Elli is seriously messed up. She was apparently some kind of Broadway star, and then discovered she had hypothyroidism when her weight ballooned. Her fiance abused her, and she left his sorry ass. Her mother continues to belittle her, her sister hates her, and her father and uncle are the only decent human beings in her family. Elli only seems to believe the bad things about herself. 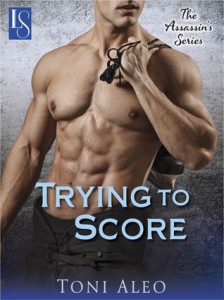 But in the big misunderstandammit, she refuses to listen to his side, even when she knows her sister hates her guts and would happily sabotage her happiness. That whole thing didn’t ring true and lasted too long.

Which, as much as I couldn’t stop turning pages, was a true thing for me about the book as a whole. I think I’d have enjoyed this one more if it were shorter. Elli’s self-loathing angst got very old when repeated as often as it was, and Shea was so patiently long-suffering that he seemed saintly in comparison.

Less would have been more in this case. But I’m still hooked on the team story. (I even bought the next book, Trying to Score.) Dammit.