Today I’d like to welcome Elise Sax, who recently published the funny and suspenseful second installment in The Matchmaker series, Matchpoint (read my review here). If you want to get the full giggle-fit, start with An Affair to Dismember. This series is too much fun to be contained in just one book. (I would love of book of Grandma Zelda’s matchmaking tips!)

How in the World Did You Dream Up Such a Crazy Bunch of Characters?
by Elise Sax 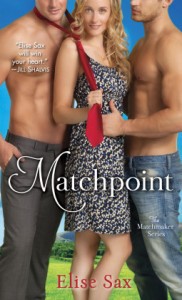 Elise: I was asked this question, recently. And I thought: Crazy? Who are you calling crazy? Really, I don’t set out and decide to create crazy characters. They just wind up that way. I think it’s a matter of perspective. I see the crazy in people—that’s what attracts me to them. People tickle me, and I seem to highlight that tickle in my stories. One of those characters is Ruth Fletcher, the elderly and feisty owner of Tea Time, the tea shop in the town of Cannes, California—where everything goes down in Matchpoint and the other Matchmaker series books. Hi, Ruth.

Ruth: It’s rude to comment on a person’s age.

Elise: I’m sorry, Ruth. That’s the writer in me coming out.

Ruth: I mean, what would you think if I call you “Middle-aged Elise” instead of Elise?

Ruth: Or “Hippy” and I don’t mean you’re a progressive liberal or anything. I mean HIP-py. Hips! You got me? You know where I’m going?

Ruth: You writer folks think you’re something special and can just say whatever you please about anybody. And FEISTY! That’s a condescending word if ever I heard one. How about I describe you as “nosy” or “sluggish?”

Elise: That would certainly hurt my feelings. I understand, Ruth. Lesson taken.

Elise: Uh, Ruth I was just explaining to the readers that I write funny, sexy books that are fast-paced and a lot of fun to read.

Ruth: I guess that’s true. They’re pretty zany, too. But you made my life pretty miserable in Matchpoint…all those crazy cult people invading my shop and all wasn’t too much fun for ME, I can tell you.

Elise: Ruth, let me interrupt you there. I think you have to say SPOILER ALERT when you talk about the plot like that.

Ruth: And Gladie going off with those two handsome men at once in Matchpoint. I don’t know how she felt about that little plot device. I mean, a woman can get tired. Not me, of course, but Gladie seemed tired. You know, you could give ME two handsome men in the plot. How come you never did that?

Elise: Well, Gladie is the main character, and well…

Ruth: Or even ONE handsome man. What’s the matter writer lady? You think I’m too elderly and feisty for two handsome men? Sheesh! Yep, you look and act like a coffee drinker. Get out of my shop!

Elise: But I didn’t get my latte! Ahem, well, that’s an example of one of my characters in Matchpoint. Don’t be afraid. The others are quite as…feisty. 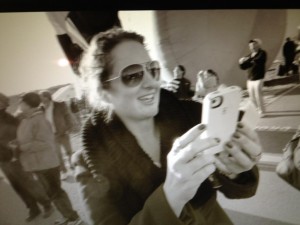 About Elise Sax
Elise Sax worked as a journalist for fifteen years, mostly in Paris, France. She took a detour from journalism and became a private investigator before trying her hand at writing fiction. She lives in Southern California with her two sons. An Affair to Dismember, the first in the Matchmaker mystery series, is her first novel.To learn more about Elise, check out her website and blog. You can also find her on Facebook, Twitter, GoodReads,and YouTube.

Elise is giving away gift cards — one winner gets a $50 card for Amazon, and two winners get a choice of a $10 card at Amazon or Barnes and Noble. To enter, use the Rafflecopter below: 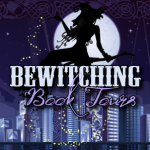