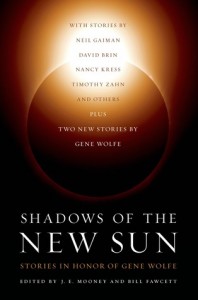 Perhaps no living author of imaginative fiction has earned the awards, accolades, respect, and literary reputation of Gene Wolfe. His prose has been called subtle and brilliant, inspiring not just lovers of fantasy and science fiction, but readers of every stripe, transcending genre and defying preconceptions.

In this volume, a select group of Wolfe’s fellow authors pay tribute to the award-winning creator of The Book of the New Sun, The Fifth Head of Cerberus, Soldier of the Mist, The Wizard Knight and many others, with entirely new stories written specifically to honor the writer hailed by The Washington Post as “one of America’s finest.”

Shadows of the New Sun features contributions by Neil Gaiman, David Brin, David Drake, Nancy Kress, and many others, plus two new short stories by Gene Wolfe himself.

Fairly or not, there are not many genre writers who are (or would have been) contenders to receive a Nobel Prize in Literature. Doris Lessing, of course, has written science fiction and won the Nobel Prize — and even better, isn’t ashamed of having written genre works. Ursula K. Le Guin. Octavia Butler, were she alive. Iain Banks, ditto. Ray Bradbury, ditto. Perhaps, in time, China Miéville. 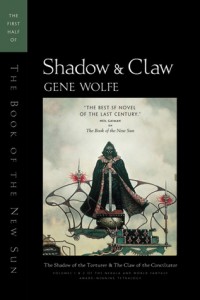 One name that often comes up in such discussions is Gene Wolfe, author of such classics as The Book of the New Sun sequence and The Wizard Knight. His use of language rewards the reader who is willing to pay careful attention (and keep a dictionary at hand!)

He’s generally acknowledged by other SF and fantasy authors as a writer’s writer, so it is appropriate that so many of them have joined together in this festschrift edited by J.E. Mooney and Bill Fawcett.

Escape Rating B: As with any collection of short stories, some are stronger than others. Many of the ones I liked best play with the boundaries between an author and the characters he or she writes. For example, “Epistoleros” by Aaron Allston is epistolary in form and set in an alternate world where the Republic of Texas remained a going concern through the 1890s, along with many of the colonial territories of North America. The twist at the end, where an author/reader turns the tables on a character, is sure to please fans of Jasper Fforde. Along parallel lines, “… And Other Stories” by Nancy Kress shows that sometimes it’s not enough to get lost in a good book, but to figure out how to escape into one.

“Ashes” by Stephen Savile is a quiet meditation on love lost and making time to travel one’s memory in the course of grief. “Tunes from Limbo, But I Digress” by Judi Rohrig is a fun tale told by an unreliable narrator — unreliable in part because the narrator isn’t entirely certain of her identity.

“A Touch of Rosemary” by Timothy Zahn and “Snowchild” by Michael Stackpole are solid fantasy tales, while “The She-Wolf’s Hidden Grin” by Michael Swanwick is an example of the most excellent sort of horror story that hits the reader even harder an hour after reaching its end.

Competent but unexceptional contributions include “A Lunar Labyrinth” by Neil Gaiman, “In the Shadow of the Gate” by William C. Dietz, and “The Log” by David Brin.

Among the weaker contributions was “Tourist Trap” by Mike Resnick and Barry Malzberg. Recent events may be coloring my impression of this story, but I was put off by its use of the trope of stuffing a female character into a figurative refrigerator. “Soldier of Mercy” by Marc Aramini tried a bit too hard to match the complexity of Wolfe’s writing, but ended up just leaving me feeling a bit confused.

Also included are two stories by Wolfe himself, “Frostfree” and “Sea of Memory”.

Despite some unevenness, the anthology is a worthy tribute to Wolfe: readers who like the anthology but who haven’t read Wolfe yet will be inspired to pick up one of his books, while long-time fans of his writing will enjoy other authors’ variations on his themes. 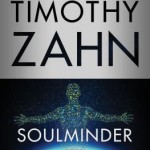 One thought on “Guest Review: Shadows of the New Sun: Stories in Honor of Gene Wolfe”