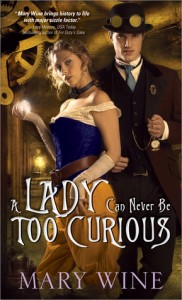 Hated and feared by the upper classes, the Illuminists guard their secrets with their lives. Janette Aston’s insatiable quest for answers brings her to their locked golden doors, where she encounters the most formidable man she’s ever met.

Darius Lawley’s job is to eliminate would–be infiltrators, but even he may be no match for Janette’s cunning and charm…

This story had potential. It really, really did. But it never quite lived up to its title.

What we have is the rather ordinary story of a Victorian young lady who chafes at the restrictions laid upon her by society’s expectations and her ridiculously authoritarian father. I say ridiculous because he expects her to be the obedient fluffhead that society demands while he never noticed that her mother snuck tutors in behind his back and gave her a real education.

Of course she does something outlandish, and of course his reaction is over-the-top and melodramatic. It’s the equivalent of tying the heroine to the railroad. He believes her quest for knowledge demonstrates “hysteria” and has her committed to a doctor’s care.

This was a very real problem, but in the case of this story, it’s how the villains are introduced. And are they ever “bwahaha” and extra sinister.

The steampunk aspects of the story are in the science. Our heroine turns out to be a “pure spirit” (more on that later) who can hear the singing of “Deep Earth Crystals”. A fact she discovers by walking into a meeting of the Illuminists, the good guys investigating the steam sciences.

Of course, no Victorian “lady” should be having anything to do with science in general or the Illuminists in particular, which starts Janette Aston on the road to ruin. At least according to her father.

It certainly puts her squarely in the sights of the evil forces that have been working against her family for generations.

And it gains her a guardian Illuminist in the person of Darius Lawley, a man who of course can’t resist her, even though he should.

Escape Rating C-: I wanted to like this a lot more than I did. Without the steampunk trappings the story has been done before. Innocent girl gains too much knowledge, decides to take a walk on the wild side, and is saved by brave man with dark past who discovers he has a heart after all.

Janette is a little too naive. We don’t see her transformation. She’s still just a vessel, even at the end. And did her talent have to be “pure spirit”? Was it really necessary to hang a lampshade on the importance of her virginity?

All the villains seemed evil or venal for the sake of evil. Or stupidity in the case of Janette’s father. We don’t have any idea why they oppose the Illuminists beyond the need for an opposition. Even Voldemort had a motive!

What made Lawley so duty-bound? There are plenty of people like him, but why was he? There was definitely an episode in his past with a society woman, but we don’t get to read about it. 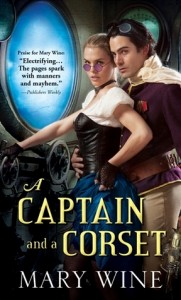 The gaps in this story left this reader too curious for satisfaction. However, the second book in the series, A Captain and A Corset, turned out to be surprisingly better. See my review at Book Lovers Inc. for details.

One thought on “Review: A Lady Can Never Be Too Curious by Mary Wine”