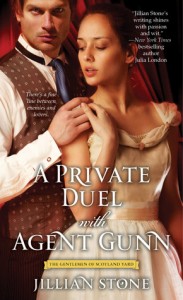 Cunning, reclusive Yard man Phineas Gunn is as skilled at capturing surly criminals as he is at charming beautiful women. But the dashing agent’s latest assignment is really testing his mettle. Officially, he’s investigating beguiling prima ballerina Catriona de Dovia Willoughby, a suspected anarchist. Unofficially, his attraction to his devilish former flame is hotter than ever.

Unsure whether to trust the enigmatic lover who betrayed her once, Cate nevertheless enlists Finn’s help to recover some priceless family jewels. Their pursuit erupts into a cross-continental adventure that begins with a double cross and crackles with secrets, lies, and sexual tension. The crime is clear—breaking and entering each other’s hearts—but as the clock ticks down, who will be the first to surrender? 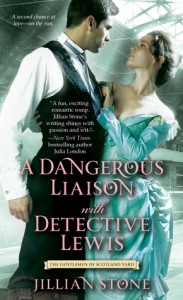 The senior Agent Gunn, and the older brother Agent Gunn, is Phineas Gunn. Readers have already become intrigued by his story in the previous books in this series, particularly in A Dangerous Liaison with Detective Lewis (reviewed here). Phineas relates the entire sad story of how he lost his first love in a mess of operational lies (he also managed to get her brother killed) while on duty with Special Branch in France.

Since this is a second-chance-at-love story, that tragic first love returns to the scene. She might not have forgiven him for getting her brother killed, but the same operation that threw them into each other’s paths before has brought them together again.

Catherine Willoughby’s late brother Eduoardo was a Spanish anarchist, and his former associates are causing trouble in England and on the continent. The question that Special Branch needs Phineas Gunn to answer is whether Catherine Willoughby, or her more famous identity as the prima ballerina Catriona de Dovia, is somehow involved with the anarchists.

After all, he lied to her about pretty much everything when they met. And he broke her heart. Not that she’ll ever let him know about that. She’s never forgotten him, and she’s never moved on.

He hasn’t either. While meeting her may have been an assignment, everything that happened between them was all too real. And once they are forced together again for the sake of this mission, it all happens again.

Is it real this time, or is someone being played?

Escape Rating B+: There are two duels. Cate and Finn are dueling with each other through the course of the story, trying to figure out what parts of what they tell each other are real, and which parts are pure invention. Neither of them is ever quite sure which is which until the very end. The emotions are real, but because their entire relationship is built on one fabrication after another, they find it difficult to trust each other, and with damn good reason.

The tension, not just sexual tension, but the pull of the adventure and the constant need to figure out which way to jump, never lets up.

Finn Gunn’s younger brother Hardy also wants to become an agent, and he’s gotten himself into a bit of a mess. Hardy does get into an actual duel, which Finn stops by means of some very fancy sharp-shooting. So there is a real duel in the middle of the story. (Hardy will get his own story later.) 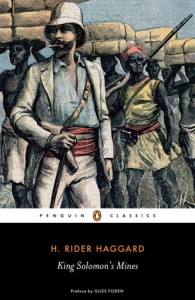 There are a lot of very fanciful characters in this one, in addition to the Agents. It reads like a wild Victorian adventure tale, King Solomon’s Mines, or something larger than life. This series gets more fun as it goes, and I can’t wait for the next one.