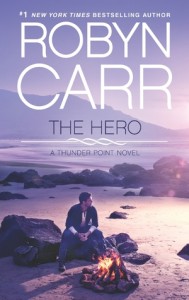 In a moment of desperation, Devon McAllister takes her daughter and flees a place where they should have been safe and secure. She has no idea what is around the next bend, but she is pretty certain it can’t be worse than what they’ve left behind. Her plan is to escape to somewhere she can be invisible. Instead, an unexpected offer of assistance leads her to Thunder Point, a tiny Oregon town with a willingness to help someone in need.

As the widowed father of a vulnerable young boy, Spencer Lawson knows something about needing friendship. But he’s not looking for anything else. Instead, he’s thrown his energy into his new role as Thunder Point’s high school football coach. Tough and demanding to his team, off the field he’s gentle and kind…just the kind of man who could heal Devon’s wounded heart.

Devon thought she wanted to hide from the world. But in Thunder Point, you find bravery where you least expect it…and sometimes, you find a hero.

The titular hero of this third entry in Robyn Carr’s Thunder Point series and the romantic hero are not the same person. Surprise! But a very excellent surprise and also totally in keeping with the way that this small-town romance series has been developing.

I think I’ve fallen in love with Thunder Point, Oregon. The more of this small, beachfront town that we explore, the easier it is to understand what makes this place so special.

The important relationship in The Hero isn’t the romance, it’s the adopted father/daughter relationship between the withdrawn Vietnam vet Rawley Goode and Devon McAllister, the woman he picks up on the road escaping from a psychopathic cult leader.

Rawley remembers all too well what it’s like to be on the run, down and out and feel like the weight of the world is on his shoulders and it’s all his fault. People helped him when he had nothing but the clothes on his back; he sees Devon as a way to pay those people back, to “pay it forward”, although he doesn’t call it that.

And Devon has a child with her, a little girl. Her daughter Mercy. Seeing how frightened Devon is makes Rawley question everything he’s ever seen about the religious commune known simply as “The Fellowship”.

He gives Devon and Mercy a home. Safety. And a chance for Devon to take back the life she gave up when she was young and scared and naive. She reaches for that opportunity with her arms flung wide.

She gives Rawley the family he might have had if he hadn’t come back scarred from his war. A daughter. A granddaughter. A reason to reach out to the community that took him in. Not just peace, but fellowship and friendship. Belonging.

Devon remakes her life. She gets a job. An apartment. Makes a home. Develops new friendships with women in the community. And even though it scares her and she’s none too sure that her judgment is sound, starts a relationship with the new high school football coach, Spencer Lawson, who is every bit as uncertain about his own readiness to start a relationship, although for entirely different reasons.

But just when she’s starting to feel secure, Devon’s life goes to smash. The cult kidnaps her daughter. And that’s when everyone in Thunder Point finds out exactly what kind of hero Rawley Goode has always been. Because Devon needs a hero to rescue her daughter from the crazed drug dealer who fathered her.

Escape Rating: B+: The utterly marvelous thing about the Thunder Point series is how each book just flows right into the next one. Although there is a story with a beginning, middle and end, there is a whole lot of catching up with the people you’ve already met. And this series is still early enough that it’s easy to catch up. Also very much worth it.

While there is a romance, that wasn’t center stage in this story. The creation of the made-up family between Rawley, Devon and Mercy was a much more compelling story than the romance between Devon and Spencer. Also, we’re more invested in Rawley getting, if not an HEA, at least becoming more integrated into the town; he’s been odd man out for quite a while. He’s got quite the snarky sense of humor once he finally starts talking!

Devon’s escape from The Fellowship and her blossoming into independence was a terrific character arc. I loved that she never wimped out, which was what made the romance the less important story. Devon needed to get herself back together, and that story was too important not to take a huge amount of time. It would have felt less empowering if a romance had saved her, she needed to save herself first.

But the threat of the Fellowship coming back to haunt her hung over her like the theme music from Jaws. The action at the end was edge-of-the-seat compelling. Wow! What a wild ride!