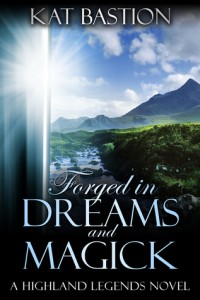 Isobel MacInnes wakes up in present-day California, lunches in medieval Scotland, and by ten days’ end, falls in love with a man and his country, only to lose them in a heart-wrenching twist of fate . . .

Found in the arms of her second soul mate . . .

Forced to balance the delicate strands of time between two millennia . . .

Shocked by revelations rewriting the very foundations of history . . . of everything.

Isobel, a rising-star archaeology student, is dropped into two ancient worlds without warning . . . or her permission. Her fiery spirit resists the dependency thrust upon her. Amid frustration at her lack of control, she helplessly falls in love. Twice.

She struggles to adjust to the unimaginable demands of two leaders of men—a laird in the thirteenth-century Highlands and a Pict chieftain in a more ancient Scotland. Isobel transforms from an academic, hell-bent on obtaining archaeological recognition, to a woman striving to care for those she loves, and ultimately . . . into a fearless warrior risking everything to protect them

This was a much wilder ride than I expected…and that’s a good thing.

Isobel MacInnes begins the story as an overachieving graduate student in archaeology, based in California, but inexorably drawn to study the history (and prehistory) surrounding her roots in Scotland.

I don’t think it’s a spoiler to say that Isobel is very much still an overachiever at the end of the story. She’s just got, well, bigger fish to fry. Possibly also bake, parboil and grill.

As an archeologist, even a budding archaeologist, she should have known better than to extract the intricately wrought stone she discovered in Scotland when she was tossed from her damaged car in a freak rainstorm. But the stone seemed to be smithed from multiple metals that could not have been worked at the time the stone appeared to have been carved, and, Isobel had just said her last goodbye to her dying grandfather.

And it was magic. Or magick.

Once she gets it back to her advisor’s lab in California (I’m trying to imagine getting that thing past Customs and the TSA and just, oh noes!) she has to share it with someone. Who better than her best friend, someone she met at the Highland Games. Iain Brodie is also an actor, and he’s always flirted with Isobel, pretending he wants more than just friendship. Isobel knows she’s not up to the same standard of beauty as a Hollywood starlet, so she ducks all his passes.

But Iain is a champion at the Highland Games because he has an unfair advantage, and he’s been flirting with Isobel MacInnes because she really is the woman that he wants. Something about the presence of the magical stone pushes them into a confrontation that reveals his true feelings for her.

And the stone transports them from 21st century California to 14th century Scotland. Isobel learns that the rest of her life is going to be nothing like what she planned it would be.

Escape Rating B-: The century-spanning scope of the story absolutely does sweep the reader along for the ride.

I’ll confess, at first, I wasn’t sure if Isobel was really in love with Iain, or if she was convincing herself that it was the best thing to do in order to survive in the 14th century. Attaching herself to Iain absolutely was the best thing for her to do for her to survive in the 14th century, but I was having a difficult time deciding whether there was really love on both sides or just Isobel bowing to the inevitable and fooling herself.

It was only after she traveled through time again that she really started living in whatever now she found herself in, however she had to live that now, that it felt like she was owning her own fate, instead of being pushed by the waves.

That part of that fate was to have two warriors as soul mates in two different time periods was icing on the cake. This would be perfectly acceptable if a man were the lead character, I’m fine with the “sauce for the goose, sauce for the gander” idea.

Time travel romance always poses an interesting conundrum. If the traveler goes into the past, as Isobel does, can they change the past and affect the future? Is that what they are meant to do? In which case, have they already done it? If they don’t do it again, what happens?

Isobel’s journey seems to be fated to make her the person, the time traveler, she is meant to become. Which means she has more ahead of her, because the training period literally tore her heart in two. As they say, that which does not kill us, makes us stronger. Isobel becomes much, much stronger. 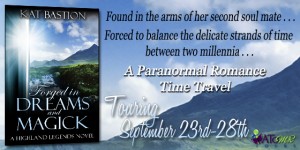 To celebrate the release of Forged in Blood and Magick, Kat is giving away a number of prizes:

To enter, use the Rafflecopter below.

For more chances to win, visit the other stops on the blog tour.

To visit the other stops on the blog tour, click here.

3 thoughts on “Review: Forged in Dreams and Magick by Kat Bastion + Giveaway”