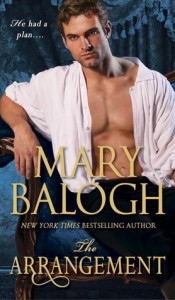 Desperate to escape his mother’s matchmaking, Vincent Hunt, Viscount Darleigh, flees to a remote country village. But even there, another marital trap is sprung. So when Miss Sophia Fry’s intervention on his behalf finds her unceremoniously booted from her guardian’s home, Vincent is compelled to act. He may have been blinded in battle, but he can see a solution to both their problems: marriage.

What an interesting contrast this couple is! Sophia Fry is a woman who has perfected the art of fading into the shadows as a survival instinct. Everyone overlooks her. She’s petite and thin and hides in the corner. Even her father called her “Mouse”, although he said it with affection.

Her hero is Viscount Darleigh, the former Vincent Hunt, and Hunt is blind. I do not mean that he is blind to Sophie’s charms, I mean that he was blinded in a war accident. Possibly an accident due to not looking before he leaped (apparently a trait of his beforehand) but an accident all the same.

No one would expect the opposites of a man who cannot see and a woman that no one ever sees.

But Vincent notices things that other people do not. And one of the things that they have in common is that Viscount Darleigh is rather being overlooked in his own life. He came back from his war both blind and deaf, and he spent some time recovering hearing and his wits. His sight is gone forever.

He let his too many female relations fuss and coddle him while he recovered. And while the title came to him too soon and unexpectedly, they are much too used to managing him and he doesn’t want to hurt their feelings. He knows they love him, but he needs to have as much independence as possible, and that is considerably more than his mother, his grandmother and his sisters seem to believe is possible.

When they practically arrange his marriage, without his consent, to a young woman who is obviously horrified at the thought, he sneaks out of the house in the middle of the night with his valet/best friend/assistant and escapes to his childhood home.

Where a scheming family tries to compromise him into marriage with a bitch who doesn’t want him but does want his fortune. And that’s where Sophie steps in. She’s the bitch’s poor relation and can’t bear to see anyone trapped. She’s all too familiar with that feeling herself.

Her conniving, scheming, bitching, fortune-hunting cousins toss her out of their house in the middle of the night, believing that starvation and penury serve her right for ruining their plans.

Instead, Vincent offers to marry her.

Both Sophie and Vincent want as much independence as is possible in their varying circumstances. Sophie is the poor relation of gentry. Her father was a scandal many times over, but he’s dead. She has no income of her own, but as a woman, she also has no skills with which to support herself. She’s not a great beauty, so she doesn’t attract men easily. She’s forced to rely on the kindness of her relatives, who simply don’t want to be tarred with the taint of her father’s reputation.

Vincent should be independent, but his blindness is a handicap. He could do more than he does, but it’s only been three years. Three years in the early 1800s, not three years in the early 2010s. Everyone wants to take care of him, and can’t quite understand that they are not helping. They mean terribly well. Getting married to someone he chooses will give him a chance to start over, and give him someone who relies on him as much as he relies on them. Vincent needs an equal, not someone taking pity on him.

Sophie equally needs someone who needs her, not someone taking pity on her, although it takes her quite a while to realize that she is helping Vincent.

They make a bargain, an arrangement after much persuasion on Vincent’s part. They will marry. She will help him straighten out his relationship with his family, and he will support her. In a year, they can separate and achieve their dreams of independence, living apart.

It’s a desperation move on both their parts. They need each other, but neither of them realizes quite how much. Nor do they have a clue just how much they are both going to hate that damn arrangement.

Escape Rating B: The Arrangement is a very lovely romance of manners. I want to call it a comedy of manners, but it isn’t a comedy. The story is a voyage of discovery for both Vincent and Sophie, and the reader is carried along on a very sweet journey to their happily ever after.

There isn’t a lot of tension in this story. On the one hand, it would have seemed artificial to insert a mad crisis of misunderstanding just to have a grand breakup to make up scene near the end, but on the other hand the story does sort of gently float to its natural conclusion. I was expecting one of Sophie’s early caricatures to get discovered and cause a ruckus, but it didn’t happen.

The crises they did overcome involved Sophie’s extreme insecurities and Vincent’s family and friends’ initial hostility over the assumption that Sophie was a fortune hunter. Sophie had to step out of her introvert’s shell, but Vincent also had to change his behavior and stop letting people manage him. They helped each other and people changed their attitude toward them.

Sophie’s methods of increasing Vincent’s independence may have been anachronistic, but the way that she helped him to help himself showed how much and how quickly she came to care.

This is kind of an post-Napoleonic War version of a new adult romance, and I can’t believe I just said that. Sophie and Vincent are going through the kinds of problems and decisions that they go through because they are both very young and are learning to cope with being married, taking over the estate and figuring out new identities all at the same time. Some of those problems are forced on them because they were under extended guardianships for unusual reasons, but still, they are both learning to be independent adults together. They grow towards each other from an unusual start, making this an odd sort of combination arranged marriage/friends-into-lovers combination. 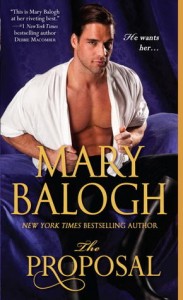 The Arrangement is the second book in Balogh’s Survivors’ Club series. One of the fascinating things about the Survivors’ Club is that all the members have serious and frequently visible and/or debilitating war injuries. I’ll be going back to read The Proposal while I wait for book 3, The Escape.

2 thoughts on “Review: The Arrangement by Mary Balogh”