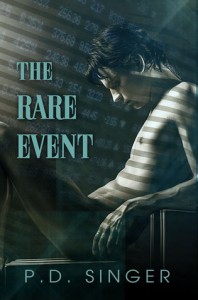 Bankrupt airlines are facing strikes, the housing market is starting to crumble, and Jon can’t wait any longer for Ricky to commit. One last night alone and one last risky trade make Jon say, “Enough.” Then Jon’s old friend Davis comes to New York City, ready for baseball and forever. The whole world is chaos, but there are fortunes to be made—or lost—and hearts to be broken—or won.

Faced with losing it all, Ricky must make the savviest trades of his life and pray for a rare event. His portfolio and Jon’s love are on the line.

According to eToro, a “rare event” in stock market terms is often referred to as a “black swan event,” something that is both disastrous and whose effects were impossible to predict in advance. A hurricane has a disastrous effect on the economy, but they can’t be predicted more than a few days out, for example.

All you can do is hedge your bets. Have insurance. Or not live in a hurricane-prone area. Or have an emergency evacuation plan.

P.D. Singer’s The Rare Event came down to two interwoven themes. One theme was that of redemption. In this opposites-attract romance, Jon Higgenboom is a trust-fund baby. He was raised with all the advantages. But there was an event in his life that undercut his sense of worth, and because of that one thing, he doesn’t feel advantaged in any emotional way. He’s still looking to redeem that one thing that cost him the man he loved, his entire social circle, the love of a family he thought of as a second set of parents and the brothers who weren’t born to him, and very nearly his future career. He still doesn’t know what he did, if anything.

The event he doesn’t understand has made him a hedge fund trader in a very unsavory firm, but one who carefully hedges his bets on every trade. He plays things both loose and safe in ways that make him and the firm a lot of money. But he’s someone who still wants things to be sane and stable, yet he’s pinned his heart on a man who sees commitment as a trap.

Ricky Santeramo pulled himself into a senior trader’s position at that same firm by playing every trade for the maximum gain, and hedging as few of his trades as possible. And also by being very, very lucky at a time when the market was going up, up, up like it was never going to stop. He wanted to have his cake and eat it, too, including in his relationship that wasn’t a relationship with Jon. Because Ricky didn’t do relationships. He wanted to keep everything as open as possible and never play anything safe. Not with Jon, and not at work.

Until Jon got tired of pretending that it didn’t break his heart to know that Ricky went clubbing with other men on the nights that they weren’t together, and equally tired of covering Ricky’s ass at work when Ricky refused to cover his exposed trading positions when millions of the firm’s dollars (and Ricky’s job) were on the line.

It’s only when Jon finally says that he has enough and breaks things off for good that Ricky discovers not just what he’s had all along, and lost, but that being a player is really about using people, and being used. He wasn’t as big or as smart as he thought he was, and it’s cost him the best thing he ever had.

Escape Rating B+: You do learn a lot about hedge funds and the stock market, and I found it fascinating. The how and why of it was absorbing, and I could see why people do this for a living. All the secondary characters of the firm were interesting, quirky people, even if there was one I wanted to strangle.

I said there were two themes. The other big thing going on in this story reminds me of the saying “for evil men to accomplish their purpose it is only necessary that good men should do nothing.” The story takes place in the months before the great recession of 2008. Jon sees the dominoes and can predict what’s coming, but only worries about making sure that their hedge fund will not get burned and how they can take advantage of the problem. No one thinks to warn the SEC that there’s going to be a major crash in the housing market because of repackaging the mortgage derivatives. Everyone was out for what they could get, even the good guys.

But on a smaller scale, the majority partner in the hedge fund is an equal opportunity sexual predator. All of the junior analysts, regardless of gender, are required to provide sexual services to this asshat in the office at regular intervals and everyone knows about it. Everyone knows who has been called into his office to service him and when. This is a private firm, and no one has been able to stop him. People either leave or swallow. That people in the firm felt like there was absolutely no recourse was, unfortunately, something I could understand. (Yes, the bastard does eventually get his comeuppance)

However, that all of the senior traders continued to have sex in the office where they had no expectation of privacy and where this known predator might walk in and/or have cameras filming (he didn’t, but how could they know?) tripped my willing suspension of disbelief a bit every time. I could accept that the owner was that evil, or I could accept the sex in the office, but not both in the same place.

If only for teaching me the financial term “dead cat bounce” I would think this story was fantastic. It’s certainly an image that is not going to fade any time soon. But it’s both Jon’s and Ricky’s redemption that sticks in the heart long after the story is over.