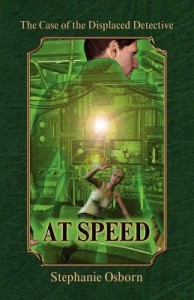 Aborting one attempt to sabotage Project: Tesseract, Sherlock Holmes — up to speed in his new life and spacetime continuum — and Dr. Skye Chadwick — hyperspatial physicist, Holmes’ new “Watson” — must catch a spy ring when they don’t even know the ring’s goal. Meanwhile Skye recovers from two nigh-fatal gunshot wounds.

A further complication is their relationship: the ups and downs between the pair are more than occasional clashes of demanding, eccentric personalities. Chadwick is in love with Holmes. Knowing his predilection for eschewing matters of the heart, she struggles to hide it, in order to maintain the friendship they DO have. Holmes also feels attraction — but fights it tooth and nail, refusing to admit it, even to himself. For it is not merely Skye’s work the spies may be after — but her life as well. Having lost Watson to the vagaries of spacetime, could he endure losing another companion?

Can they work out the intricacies of their relationship? Can they determine why the spy ring is after the tesseract? And — most importantly — can they stop it?

I adore Sherlock Holmes pastiches, and yes, I know I’ve said that before. Most recently in my review of the first book in this series, The Case of the Displaced Detective: The Arrival.

I’ll also say that the titles for all the books in this series so far are absolute mouthfuls. But so what? If you enjoy watching the Great Detective get thrown into situations that Conan Doyle couldn’t possibly have imagined, well, that’s why so many of us watch Sherlock and Elementary, isn’t it?

But Stephanie Osborn hasn’t created a 21st century Holmes, she’s figured out a way to displace the original — or nearly the original — 19th century Holmes from his own time to the 21st century. She’s used a scientific experiment based on Madeleine L’Engle’s tesseract concept (combined with a bit of Jasper Fforde’s Thursday Next universe) to create the possibility of Holmes being a living man in an alternate universe, and providing an excuse to drag him to our 21st century; to a universe where he only existed as fiction.

Then she turns him loose to adapt to modern life. But not too loose. After all, any project that could manipulate the spacetime continuum to that extent would have to be top secret, and Holmes’ detection abilities relied on his brain, which certainly arrived intact. But he is only human after all, and he has lost his entire support network. Watson, Mycroft, Mrs. Hudson, Lestrade and the Baker Street Irregulars are irretrievably back in the 19th century, in a universe where Holmes truly did die with Moriarty at Reichenbach.

Holmes turns to the person who brought him to the 21st century, Dr. Skye Chadwick. She is a brilliant physicist, and has also been a volunteer investigator as part of her own past. They work together to discover who, or what agency, has repeatedly attempted to sabotage and infiltrate the tesseract project.

In the process, Chadwick becomes Holmes’ Watson, but much more. She is his co-investigator, and his partner. But she is also the person in whom he can confide, because she understands the depth of his loss. Skye is as alone in the world as he is; her parents died when she was young, and she feels his isolation keenly, even worse, she feels responsible for it.

And he knows he can’t lose her. She is the only one he has. Even if he can’t let himself express what he feels. And even if his seeming coldness hurts her. It’s better that he hurts her a little than that he neglect his discipline and that she be killed by his inattention to some vital clue.

Escape Rating B+: I’m having so much fun reading this series, that I couldn’t make myself stop and went straight on from this one to the next.

That being said, a lot of this story is tied up in the growing romance between Holmes and Chadwick. It is tremendous fun to read, but isn’t quite as action-oriented as the first book. I still had a ball.

The characterization of Holmes as a Victorian, albeit a very unconventional one, adapting to the 21st century, works for me. He enters his new life in fits and starts, some things come easily to him, some things are difficult. Technology is easy, he always pursued the latest methods in his own research. The changes in mores and dress are often difficult. He finds concentrating on the practicalities help, but his reaction to Skye in a two-piece swimsuit is absolutely priceless.

The case here is involves closing the espionage ring that was introduced in The Arrival. The way the story unfolds revolves some absolutely fascinating delving into the Holmes canon stories, including inconsistencies about Moriarty and Reichenbach. It was a great way of resolving the case, and letting Holmes have a sense of closure about his life.

But it did raise one inconsistency in the 21st century world. That being, if Holmes didn’t exist in our universe, how did Moriarty? Read and find out! 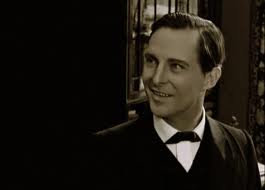 Sherlock Holmes is the “most portrayed movie character” according to Guinness World Records. I found myself wondering who Osborn based her description of Holmes upon. I see Jeremy Brett (see picture at right), but your mileage may vary.

At Speed is essentially a continuation of The Arrival. I don’t think a person could read this book without having read the first one. I also don’t think it would be a hardship for anyone who enjoyed new or reinterpreted Sherlock Holmes stories. These are just plain fun. The game is very much still afoot!

3 thoughts on “Review: The Case of the Displaced Detective: At Speed”