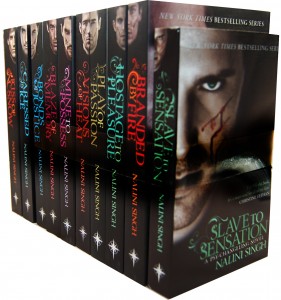 Rural Alaska towns are not known for their cell reception, or internet accessibility. This makes them most unfortunate locations to be stranded after a catastrophic car failure. Oh Subaru, why hast thou forsaken me?

Aforementioned small towns do, however, have community bookshelves. Free for pillaging!

I was left with a choice of either the futility of convincing rural Alaskans that NO THIS CAN’T WAIT UNTIL TUESDAY, or mainlining the Psy/Changeling series.

Marlene, devoted fangirl that she is, clearly supported my decision escape the crushing reality of a massive towing debt in favor of futuristic inter-special hook-ups.

Was this a wise decision?!

Slave to Sensation: Hmm, how do you circumvent any extremely valid objections people might have to Their Glorious Leader shacking up with an enemy government lackey? Make her physiologically dependent on The Mighty Changeling Cock! (-)

Visions of Heat: Stalking, breaking and entering, sexual assault, and denial of necessary medical care. Someone get this woman a fucking protection order. The Changelings were all high-and-mighty about their anti-murder stance, but they don’t seem too terribly concerned with domestic violence and rape. (-) 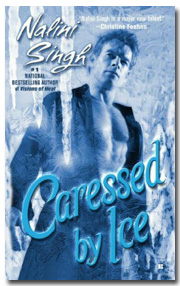 Caressed By Ice: What is this? A man who respects a woman’s boundaries, follows her lead, is totally upfront about limitations he is placing on a relationship, and supports her accomplishments? Wolflings unite! Gotta keep the women away from this monster by any means necessary. (+)

Mine to Possess: How dare you be traumatized by being sexually assaulted as a child! That vagina belonged to me! I shall now slut-shame you, verbally abuse you, emotionally batter you, threaten you, demean you, demand sex, and make sure everyone knows that any twinge of emotional discomfort I am feeling is 150% your fault. Alternate Title: The Proto-Jacob. (-)

Hostage to Pleasure: Accidentally bleeding on a child saves his life. Provides necessary leverage to bang his mom. Nailing mommy-dearest psychically cures her twin sister’s homicidal impulses. Damn. All problems truly can be solved through the mighty power of the changeling cock. (-)

Branded by Fire: These groups have been allies for 10 years in an ongoing war against a common enemy. No one has problems with people sleeping with the enemy, but shacking up with an ally is an unthinkable act of betrayal? (-) 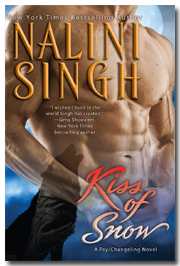 Play of Passion: Again with the pretend relationship barries. High-ranking women have been sleeping with their subordinates for millennia. Fuck this misogynist bullshit. Alternative Title: Woman on Top? Haha! That’s a good one. (-)

Kiss of Snow: This hookup has been building for awhile. Bonus points for not creepily stalking and/or isolating her as a teen. His series long ability to not perv over the jailbait, combined with her male relatives acknowledgement that she is an adult capable of making her own goddamn decisions (unlike every other male relative in the series) outweighs the triple crown Dues ex Machina.

How many impossible escape hatches do you need? We have a series long contrivance machine known as the changeling cock. Defrosting Cryo-lady and self-aware psychic networks are not particularly necessary.

See? The Doctor only needs one Deus ex Machina per episode. Reign yourself in!

Is there an alternative title to this series? Something along the lines of the Sexpot Contrivance Machines would be appropriate.

Then we have Contrivance Machine known as the Mighty Changeling Cock. All psychic health issues can be solved by a good deep dicking. What happens when the Psy wants a divorce? Or has an affair?

These eye-roll inducing situations aside, I cannot support the inherit misogyny in every page of the series. Women may only sleep with men pre-approved by their brothers. Only evil women get abortions. Slutty women deserve whatever suffering they’ve endured. A woman’s disinterest in sex must be forcibly eradicated. Are you seeing a pattern? It’s a pattern of infantalizing women. They exist only as extensions of men, and if their preferences or actions run contrary to the men? Well then they are “brats” or “divas” and need to be brought to heel. Though isolation, emotional manipulation, psychological abuse, and physical and/or sexual assault.

The only two books that got a positive rating were those heavily featuring Judd. Who is, as far as I can tell, the only non-sexist man in the series. The rest of them are assholes.