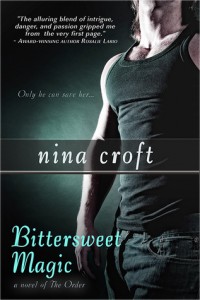 Bittersweet Magic is the second book in Nina Croft’s Order series. The Order referred to in this series is “The Order of the Shadow Accords” and it’s administered by the vampires. I find the concept of vampire peacekeepers to be only the beginning of throwing genre stereotypes into a blender and hitting the puree setting, but that’s part of what makes this series so much fun.

The problem with the Accords is that the number two vampire in the Order, Christian Roth, has just married a half-Fae, half-Demon named Tara who can move between the Faelands and anywhere else she wants whenever she wants. Her mother and the Demon Asmodai were basically the Romeo and Juliet of the Fae/Demon War. She’s not supposed to even exist, and the Fae are mostly pretending she doesn’t, even though the Fae King is her uncle.

In Bittersweet Magic, the Demon Asmodai needs to steal a magic Key from a convent. It’s not just any old key, it’s a key that will allow someone to move between the planes of existence, including opening the portals to the Faelands. Of course, he was supposed to have destroyed it at the end of the War. But he didn’t.

Asmodai has a witch on retainer. Rosamund sold Asmodai her service over five centuries ago in return for performing thirteen tasks. Roz is a Seeker; she finds things by magic. Finding the Key is supposed to be her last job. All she has to do is pretend to be a nun until she can steal the key.

Until some seriously awful monsters kill all the other nuns except one scared young woman and Roz and steal the Key right out from under her hidden nose. And tell them to deliver a message to the head of The Order.

The one group that Asmodai has told Roz she should never visit, because they will kill her the moment she identifies herself and what she is. Except that Roz doesn’t really know what she is.

She only knows she’s seriously sick of pretending to be a nun. And that Piers Lamont, Head of the Order office in London, is the damn hottest thing on two legs she’s ever seen, whatever HE is.

Escape Rating B+: Like Bittersweet Blood, Bittersweet Magic is also a story about a woman who has been lied to about who and what she is discovering the truth of her identity and about the reality of the world she belongs in.

Roz is a witch. Among other things. But she has to own it, and the truth of her heritage has quite a lot of bitter mixed in with the sweet. Her mother was burned as a witch, and only calling on Asmodai saved Roz from a similar fate.

Her mother expected Roz’ father to save them. Which does bring up the question about who Roz’ father really is. The reveal on that particular secret is something that Asmodai seems to have been savoring for a few centuries, and it’s a doozy.

The Demon does turn out to be one of the good guys. More or less.

Because Asmodai has kept Roz isolated for all of her long life, Roz has no idea who she can trust. She does figure out that the Order are not the bad guys that Asmodai has made them out to be, but she isn’t quite sure what they are, either. She’s used to being on her own, and they’re used to keeping everyone in the dark.

That Key that Roz was supposed to steal is the only thing keeping a really big EVIL from destroying the Earth. It’s an EVIL Goddess that still wants Piers back, even after he imprisoned her for 1,000 years. Talk about carrying a torch!

Piers has just figured out he wants Roz, even if he doesn’t think he knows what love is. There’s no triangle like an eternal triangle.

This series is just too much fun not to jump on board for the ride. And it’s totally addictive, like chocolate! 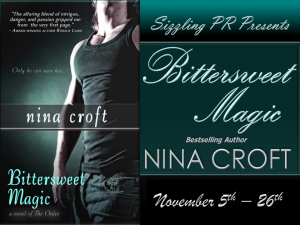 The celebrate the release of Bittersweet Magic, Nina is giving away a $25 gift card to Amazon. To enter, use the Rafflecopter below. 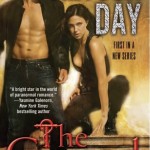 Review: The Cursed by Alyssa Day