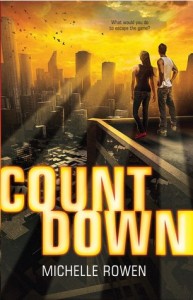 3 seconds left to live. Once the countdown starts, it cannot be stopped.

2 pawns thrown into a brutal underground reality game. Kira Jordan survived her family’s murder and months on plague-devastated city streets with hard-won savvy and a low-level psi ability. She figures she can handle anything. Until she wakes up in a barren room, chained next to the notorious Rogan Ellis.

1 reason Kira will never, ever trust Rogan. Even though both their lives depend on it. Their every move is controlled and televised for a vicious exclusive audience. And as Kira’s psi skill unexpectedly grows and Rogan’s secrets prove evermore deadly, Kira’s only chance of survival is to risk trusting him as much as her instincts. Even if that means running head-on into the one trap she can’t escape.

My Review: Countdown was originally published in 2008, under the nom de plume “Michelle Maddox,” as a fun adult science fiction romance romp. Unfortunately, I was not aware of the provenance of this book when I started reading. It simply began with an air of uncanny familiarity….

Countdown 2.0 was one of those books I grabbed on a whim from Netgalley. Who doesn’t love a scathing critique of Reality TV coupled with murder and mayhem? I chalked my unerring ability to predict dialogue and plot twists up to simple proof that YA had finally devoured itself to the point of unintentional self-parody. 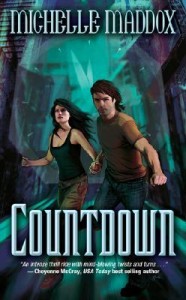 It wasn’t until we built up to the obvious sex scene that I noticed something off. YA = no sex. Why am I so damn convinced this will lead to sex? More importantly, why isn’t it leading to sex? This is clearly supposed to be a sex scene. Nobody gives a shit about teens kissing.

At which point I became convinced this was some seriously ballsy plagiarism, and had to frantically search out the original version so I could warn the poor author of the complete disregard for her intellectual property. Imagine my surprise when I learned Michelle Rowen and Michelle Maddox were the same person.

**Countdown (2013) is a rewritten and revamped Young Adult version of Countdown (2008), which I wrote under the pen name Michelle Maddox**

So much for my abortive career as a Crusader for First Amendment Rights.

Michelle was being quite generous when describing Countdown 2.0 as “rewritten.” In a blatant attempt to ride The Hunger Games wave, her editor must’ve told her to turn the protagonists into teens, take out the sex, and they’d rebrand. Easy Money!

Which is quite literally all that was done.

Armed with this knowledge, Countdown 2.0 makes much more sense. In the opening chapters of Countdown 2.0, Rogan, all of 17, is scornful of Kira’s inclusion in the game. She’s just so “young, fresh, and sweet.” Because there is just a world of experience between 16 and 17. That 17th birthday is such a dark transition from innocent smiling child to jaded dead-eyed malefactor. Amiright?

Then the whole build-up to, and fall-out from, the “Reward Room” was absolute and utter bullshit. Teenagers have sex Michelle. Accept it. Own it. Depict it. If you’re too squeamish to depict realistic teen sex, then don’t write the scene.

Escape Rating D/B-: Countdown was a fun read back in 2008. It held up well, and had the advantage of being released before The Hunger Games. Michelle thought of it first! (She also had the decency to introduce a romance without the now obligatory love-triangle of stabbing eye pains.) Take that multi-millionaire author Suzanne Collins!

Countdown 2.0, however, was pretty terrible. You cannot transfer the decisions, dialogue,  relationships, and characterizations of two adult whole cloth to two teenagers. Teens do not talk or act in the same way as their mature counterparts. By lowering the ages of the protagonists and making no other substantive changes (a brother becomes a father, citizenship papers become full-ride scholarship – it’s all cosmetic) you destroy the credibility of your world. If you want me to buy these kids as, well, kids, you have to change everything about them. Write Kira as she would have been as 16. Not as 26-year-old Kira pretending to be 16. Consistency is extremely important in scifi. We need to be able to relate to the characters to accept the future being depicted.

The cognitive dissonance is jarring throughout, particularly for anyone who read the original Countdown, and has the superior version floating around in their brain.

Verdict: Go pick up a copy of Countdown. Skip Countdown 2.0. There is plenty of YA Dystopian out there critiquing the media, video games, and violence in our youth. Most of them even do it better.