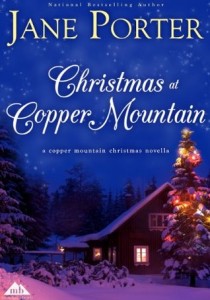 Since the loss of her family in a plane crash, Harley Diekerhoff has led a quiet life and keeps to herself. Taking the temporary job at the Copper Mountain Ranch as widower Brock Sheenan’s housekeeper seems perfect for her. But her calm cocoon is invaded with the arrival of Brock’s pre-teen twins, Mack and Molly who’ve never experienced a proper Christmas and before she knows it, Harley’s determined to make their holiday perfect.

Annoyed at first by Harley’s interference, Brock is secretly pleased she’s changed Mack and Molly’s world. It doesn’t hurt that he finds Harley incredibly attractive, fierce, smart and passionate. It’s also an added bonus that she’s not afraid to challenge him and get his blood heated! But when sparks fly and the attractions sizzles between them, Harley’s not so sure she can handle something permanent with this dark, taciturn cowboy who doesn’t know how to let her in. But Brock is determined to hold on to her and praying for a Christmas miracle…

Christmas at Copper Mountain would make the perfect Hallmark Holiday Special. It has just that perfect blend of heartwarming family togetherness and holiday miracle sparkle, with a sweet love story as the star on top of the tree.

There’s even a “Grinch” in this holiday tale. Certainly Brock Shennan has lost track of the meaning of Christmas in the decade since his young wife died and left him with 6 month old twins to raise alone. Now Mack and Molly are 11 and while he loves them unconditionally and puts them first in his life, it’s become a hard, cold life without a lot of fun, spontaneity or open affection.

The children see a lot more chores from their dad than they do hugs.

As far as holiday decorations go, well, Brock says they aren’t worth the bother or the expense. (If you are hearing the echo of “Bah, humbug”, it’s intended.) Brock isn’t quite that bad, but the kids are 11. They need a little joy in their lives.

Brock is not a bad father. He’s strict but generally fair. The problem is that he’s walled off all of his emotions, and left the kids on the other side of that wall. They don’t remember their mother, she died when they were infants. Their father treats them like little adults, but they are still kids.

Into all of this walks Harley Deikerhoff. The job of temporary cook and housekeeper at the Copper Mountain Ranch is supposed to be very temporary. Harley was only supposed to be in Marietta, Montana for six weeks, just long enough for the regular cook/housekeeper to get some time off, and for Harley to get away from her well-meaning but smothering family.

The job was supposed to be housekeeping for the owner of the ranch and cooking for the men in the bunkhouse. Nothing was said about children. If she’d been informed about the children, she wouldn’t have taken the job.

The children arrived in the middle of the night two weeks into the job, after they ran away from boarding school in New York and brought themselves home. It was a crazy thing to do. Crazy for them, crazy for Harley, and crazy for Brock.

Because the kids upset all the boundaries. Mack and Molly’s presence forced Harley to deal with why she didn’t want to be around kids at the holidays; something she had been avoiding for three long and painful years.

Watching Brock deal (and sometimes not deal) with his children made Harley step over the line between employee and employer and start telling Brock what she thought his children needed from him, whether he wanted to hear it or not.

And the more they argued about Mack and Molly, the more that Brock and Harley came to see that what they were really talking around was how they might feel about each other; if they gave it a chance.

This one ties every possible broken heart back together with a big Christmas bow and sprinkles tinsel on it. Possibly with heavenly intervention (your mileage may vary on that last bit).

Still, this story has a sleigh full of holiday spirit. The best part of the story for me was the development of the relationship between Harley and Mack and Molly. She really does fall in love with the kids first, and the blossoming of that relationship is the one that opens her heart to the possibility that she might be ready to love again.

I wish she hadn’t lectured Brock on being a “friend” to his kids. He can be their parent and still have fun with them, and does he ever need to figure that one out! They can have a trusting and loving relationship while he is their parent. (I’m saying this because I just finished a book where part of the problem was a dad who wanted to be his daughters’ friend and completely forgot about being their parent). I may have a book hangover about this one.

The romantic angle of this story got a bit shorted in the overall holiday tale. It was mostly sweet with a bit of heat, but the majority of the story felt like it was about Harley waking up from her stupor and putting more life into the Copper Mountain Ranch as well as falling for the family.

Falling for Brock (and him finally admitting that he had fallen for her) felt like the icing on the cake!

Jane is giving away an ebook copy of Christmas at Copper Mountain to one lucky commenter. To enter, use the Rafflecopter below.