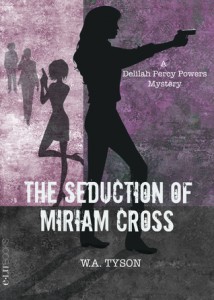 Can Delilah Percy Powers figure out who killed Miriam Cross before she becomes the killer’s next target?

Miriam Cross, author, feminist and philanthropist, disappears from her Philadelphia home. A year later, a lonely recluse named Emily Cray is brutally murdered in her bed in a small Pennsylvania town. Miriam and Emily are one and the same. As Delilah and her staff of female detectives – a militant homemaker, an ex-headmistress and a former stripper – delve into Miriam’s life, they become submerged in an underworld of unfathomable cruelty and greed with implications that go far beyond the gruesome death of one woman or the boundaries of one country. Eventually Miriam’s fight for justice becomes Delilah’s own…until Delilah’s obsession with finding the truth may prove just as deadly.

Don’t let the title fool you, the seduction involved in this story is all about the reader getting seduced into following the mystery.

Miriam Cross’ seduction happened a long time ago, and it has already led to her death. It’s the mission of Delilah Percy Powers and her band of investigators to find the trail that led to her sensational murder. Also to discover why there hasn’t been a sensation regarding the murder of a best-selling author living under an assumed name in a small town.

Miriam Cross might not have been the big name she used to be, but former New York Times best selling authors don’t get beheaded every day. She should have been tabloid fodder for a couple of news cycles at least–not relegated to the back page and hushed up.

Someone important wants Miriam’s death swept under the rug. Which means that there is something still worth keeping secret. And when Delilah takes the case from Miriam’s niece, she discovers that the secret wasn’t just worth killing for, it is worth continuing to kill for–whatever Miriam died to protect isn’t over. Not by a long shot.

Whatever Women NOW might have been, investigating even asking questions about it leads a trail of dead bodies and mobsters right to Delilah’s door. She knows she’s next, but only after she discovers something too dangerous not to see through to the end.

Escape Rating B: What drew me in (seduced me, if you will) was Delilah’s investigation and the way the case kept getting deeper and deeper. Also how she fit the personalities of each of her very unique investigators to the different facets of the case.

While on first glance, it might seem like a bit of a gimmick that all of Delilah’s teammates are female, this is far from a takeoff on “Charlie’s Angels” in spite of that cheesy cover picture. One woman might be an ex-stripper, but another is over 70 and an ex-nun. The third is a volleyball coach and a housewife when she’s not tailing suspects.

It’s fun to watch them work. It’s also neat to see them rub along together. There is no macho posturing, they just get the job done. They genuinely care about each other. Needless to say, this book passes the Bechdel Test with flying colors, and without being preachy about it. There’s work to be done.

But about the case itself. At first, Delilah is in this to bring closure to a former client. But then, she discovers that there’s something fishy going on, and she can’t stand not to discover what it’s all about. But the more she digs the bigger the case gets.

While it’s fascinating to watch her work, and her cause is very definitely just, the case feels like it gets to be a bit too big for the story. The ending is tied up too neatly and isn’t explained quite as well as it could have been. Or perhaps we don’t know enough about Delilah and her cohorts yet to understand why all these people owe her so many favors.

I did like Delilah and her band quite a bit. I hope to see them solve more mysteries in the future!

Wendy is giving away a copy of The Seduction of Miriam Cross (US/Canada)! To enter, use the Rafflecopter below!

8 thoughts on “Review: The Seduction of Miriam Cross by W.A. Tyson + Giveaway”