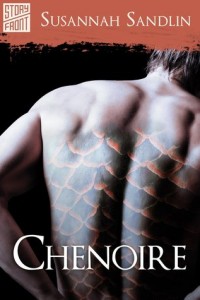 When Faith Garrity’s twin sister died, she lost a part of herself. Unable to move past the pain, the once-driven ornithologist is at risk of losing her career as well. To save her job, she heads to the oil-ravaged wetlands of Louisiana. There, in the bayou community of Chenoire, she encounters the handsome but guarded Zackary Préjean, still suffering from a great loss of his own.

She’s drawn to Zack, but soon finds that the Préjean family isn’t what it seems… They have dangerous secrets—and deadly enemies. Caught up in a feud that threatens the area’s uneasy truce, Faith and Zack must learn to trust each other. Survival will require enormous sacrifice, but it just might also give them both a way to move on.

Susannah Sandlin, whether she is writing as Sandlin or as Suzanne Johnson, always does a fantastic job of painting extremely clear pictures in her readers’ minds of both New Orleans and the less familiar but much creepier Louisiana bayou country.

Chenoire also brings us back to the devastation caused by the 2010 Gulf Oil Spill , and the reminder that the damage was not just confined to shores frequented by tourists. The spill continued for months, and the effects are still being felt in coastal wetlands today.

It’s the aftermath of the disaster that sets up this story. Faith Garrity is an ornithologist who plans to study the effects of “storm-shock” on the avian population of the bayou. She believes that the oil invading the birds’ habitats changed their coloring.

Well, Faith has sort of a plan. What she really has is a concept that she hopes will get her academic career back on track, and a lot of desperation. She shows up during “gator season”, and can’t get a boat or a guide to take her where she needs to go.

She’s desperate because she lost her twin sister to an auto accident, and hasn’t managed to recover from her own personal disaster.

Faith gets sent where she needs to go, to make a bond with someone else who is alone. In the middle of absolutely nowhere, there’s supposed to be someone who might rent her a boat. Faith is sent to Chenoire, a very small town with a very big secret.

In Chenoire Faith finds herself in the middle of the Préjean family, and the dynamics between grown-up sons who can’t get over their father’s remarriage, and the woman who gave up her city life to marry into a place she can never be part of and where she’s resented at every turn.

All the Préjean sons are twins, except for Zack. Faith lost her twin. They have a common place from which to start at least a friendship, maybe more. Until Faith is caught in the middle of the Préjean family feud, and Faith learns way more than she bargained for; about Zack, about Chenoire, and about herself.

Escape Rating B: Chenoire is a short story, and I wish it were longer. I adore everything Susannah/Suzanne writes, but the tale hints at a deep backstory that I’d love to have seen.

It isn’t difficult to guess the nature of the secret of Chenoire. Figuring out that the Préjean family, and their enemies, are all shapeshifters, is not hard. The story is in Faith realizing that it’s not just okay for her to be alive, but that it’s okay to be happy to be alive after losing her twin, combined with Zack figuring out that having at least a civil relationship with his stepmother does not mean that he doesn’t still mourn his mother’s loss.

We see the beginning of Faith’s relationship with Zack. This isn’t a romance, and what they have isn’t insta-love. Thank goodness. They have a connection and the beginnings of both friendship and trust, which is a fine start for any relationship. We see the start of their healing, but not the end. We leave the story with hope that they get there.

Chenoire reminds me a lot of the author’s other recent backcountry story, Christmas in Dogtown. The story isn’t quite the same, but the settings are similar; both Chenoire and Dogtown are lost towns with deep roots in the misty past of legend. They both contain legends that still live in the present, but must be kept secret. And they both conclude with that hope of a happy ending, combined with the sense that there are still magical places in the world. 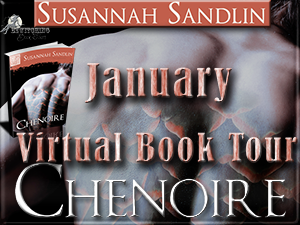 Susannah is giving away the following prizes: