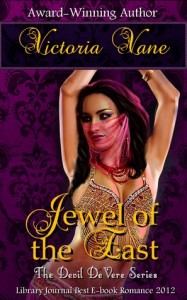 Maimed by misfortune… healed by love…
His wounds run deep… Having once lived his life only for larks, laughter, and ladies of easy virtue, Captain Simon Singleton has returned from war a shambles of a man. Although free from six years of captivity, he’s still fettered by fears that confine him to a life of seclusion.

Her scars are well-hidden… Once the crowning jewel of the most lavish brothel in London, the exotic Salime finds her reputation and livelihood destroyed by a bitter rival. With a closely guarded secret stripped away, she fears no man will ever desire her again. Seeking aid from one who once saved her life, she accepts a proposition to become a companion to his war-scarred friend.

But love is the eternal cure… When circumstance brings these two damaged souls together, fate ignites a love story worthy of the Arabian Nights.

Jewel of the East is a sensual love story between two damaged and scarred people, brought about by their relentlessly manipulative matchmaking friend, the Devil DeVere. 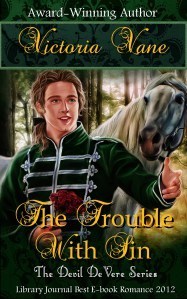 We’ve met both Simon and Salime before, and in somewhat better circumstances. Simon, better known as Sin, was one of DeVere’s school chums. Their escapade with the lion got all of them expelled and rusticated.

They were all a lot younger and in Sin’s case at least, considerably lighter at heart. Sin didn’t think any of his antics would catch up to him, until the morning they all fell on him at once. He’s been paying ever since. (Sin’s last straw, or his parents’ last straw, is detailed in The Trouble With Sin).

DeVere and Ned Chambers (Ned’s story is in A Wild Night’s Bride) have believed that Sin was killed in action in the Colonies. Instead, Sin has been languishing in a prison hulk for six long years. He may have returned from the dead, but the man who comes back is not the same as the one who left.

Six years as a prisoner of war in a hellish situation has left Sin with horrific nightmares and a full-blown case of PTSD to add to the permanent injury to his right hand. He needs healing, and Bedlam was not the place for it.

DeVere has a solution. DeVere always has a solution. Sin can hide in DeVere’s London house and be mostly alone. As he needs to be; part of his PTSD is that he can’t bear to be touched.

Salime can make him beg for it.

Salime thinks she’s doing a favor for DeVere. It doesn’t take long for her to come to value Simon for himself. She never realizes that DeVere is meddling, and matchmaking, both Sin and herself into a relationship that will heal both of them.

Escape Rating A-: Jewel of the East is a decadently delicious addition to the marvelous Devil DeVere series. And while it would be possible to read Jewel without having read the rest of the series, if you love historical romance you would be missing an absolutely treat. 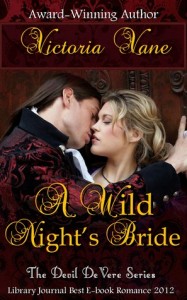 It was great to catch a glimpse of how the characters from the previous books are doing, especially DeVere, Diana and Ned Chambers. Even though DeVere is not the star of Jewel, his influence on events is keenly felt throughout the story. His house, his friends, his matchmaking, his manipulative meddling. And he’s right again, just as he was in A Wild Night’s Bride.

Sin and Salime have both been deeply wounded before they reach this point. Sin’s path to recovery, while difficult, seems more straightforward. We know what damaged him, and we see him working against his internal barriers to become whole again.

It’s easy to see why Salime wants to help him for his own sake, no matter how she starts out. Sin has a lot to overcome, but he is trying.

The road that Salime took to reach her present circumstances is not as clear. She was kidnapped in childhood and sold into slavery in a sultan’s harem. While that sounds romantic, it clearly is not. DeVere rescued her from a life of prostitution after she was scarred and discarded. But in England, she became a famous courtesan, until the unveiling of her scarred face got her tossed out of her place.

But Salime has led a life where she can never reveal her feelings for anyone. She has made a living in the only way she knows how, and she knows it is precarious at best. Her facial scar makes her feel unworthy.

What Sin gives her is that as she heals him, he gives himself to her without reservation. Not just physically, but also emotionally. She’s never been loved. Desired, but not loved. She’s sure his feelings can’t be real. So she runs away.

Salime tells Sin most of her personal story through stories, much like Scheherazade and the Arabian Nights. He uses those stories to track her down. It’s beautifully done, but I would also love to have heard her tell her story without embellishment. She is exotic, and I would love to know more of her story.

I’ll have to content myself with future installments in DeVere’s story. Or future tales of DeVere’s meddling. They are the same marvelous thing! 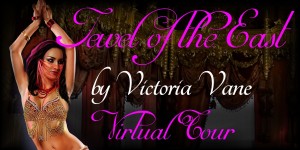