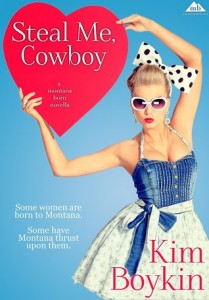 Unbeknownst to her boyfriend, Sassy South Carolina hairstylist, Rainey Brown, is headed to Missoula, dead set on giving her minor league baseball player boyfriend of four years an ultimatum. Either put a ring on it or let her go, preferably not the latter.

When Rainey’s piece of crap car dies in the middle of Nowhere, Montana, she’s sure she’s a gonner, until gorgeous restaurateur Beck Hartnett stops to help. Beck falls hard for Rainey, and knows she would admit she’s fallen for him too, if she wasn’t too stubborn to admit it. Beck has five days before the car is repaired to steal Rainey away from a boyfriend who doesn’t deserve her. Five days before she’s gone for good.

You can’t buy experience, but you can buy “the experience” at the Nell’s Cut ‘n Curl after Rainey Brown gets stranded in Marietta Montana.

Rainey Brown has been true to her minor league baseball playing boyfriend, Adam, for four long and lonely years while Adam has been chasing his dream of the major leagues. She hoped that one day Adam would either make it to the bigs or retire to coaching, and they would be together for good.

Instead, he took up coaching 2,000 miles from their home base in Columbia, South Carolina, and didn’t ask her to come to Missoula, Montana to be with him. He said he wanted her to “visit”. She had finally had enough. But not quite.

She packed up her suitcases and her professional cosmetic and hair dressing boxes into her beat up Honda Civic and set out for Montana. It helped that the salon she worked for had closed and left her unemployed. But still, it was the principle of the thing. It was time for them to be together.

Then her car gave a death rattle outside Marietta. Fate had other plans. Because Rainey was rescued by a cowboy. Sort of a cowboy. Certainly a man who thought that whoever put Rainey into the position of driving across country in that beat-up rat trap should be shot. Or at least horse-whipped.

Beck Hartnett set out to steal Rainey from whoever the jerk was that brought her out to Montana. He started out by alternately being a jerk himself, being marvelously sweet and helpful and pushing too fast past her boundaries.

All he really needed to do was let Nell, and Marietta, work their magic.

And let Rainey figure out what she really wanted all along.

Escape Rating B: Steal Me, Cowboy was surprisingly sweet, with just enough tart to make the perfect romantic treat. It’s also not quite as western-themed as the earlier entries in the Copper Mountain Rodeo series, this one is much more small-town romance than western.

Rainey starts out the story already conflicted about Adam. She’s kept the faith throughout their four-year relationship, and she trusts him, but she’s starting to realize that she gives a lot more than she gets. She’s always available whenever he wants, but he’s not there for her in any way. She’s ready to move on, but he won’t stick around long enough for her to even have a conversation about where they are headed, if anywhere.

Beck’s in an interesting position. He falls for Rainey the minute he sees her, and can’t figure out what to do about it. He keeps trying to do the right thing, but can’t quite figure out what the right thing exactly is. He owns the best restaurant in Marietta, he has more than enough money to fix Rainey’s car and send her on her way, but she’s too proud to take his money (and so she should be) and he wants her to stay in Marietta. Also, the more he observes her phone calls with Adam, the more certain he is that her relationship with Adam is a bad idea.

He’s right, but the breakup has to be clean, and that’s not exactly what he has in mind. What Beck has in mind is very, very dirty. An awful lot of fun, but very dirty. To be fair, Beck starts thinking about forever with Rainey pretty darn fast, and that seems to be more than Adam has ever thought about.

Still, Rainey has to get there on her own.

The character who steals the story is Nell, the owner of the Marietta Cut ‘n Curl. Nell has been “fixing” hair forever, and is still wearing a uniform and charging 1960s prices to “her people”. But she’s a friend and a second mother and a mentor to Rainey just when she needs one, and is just a totally awesome lady. Rainey asks Nell for a place to work, but what she gets is a refuge. And together, those ladies are something very special.

Kim and her publisher, Tule Publishing, are giving away one ebook copy of Steal Me, Cowboy to one lucky winner. To enter the giveaway, just fill out the rafflecopter below. This giveaway is open to all!
a Rafflecopter giveaway

5 thoughts on “Review: Steal Me Cowboy by Kim Boykin + Giveaway”