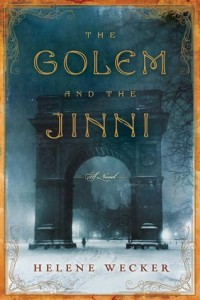 Chava is a golem, a creature made of clay, brought to life by a disgraced rabbi who dabbles in dark Kabbalistic magic. When her master, the husband who commissioned her, dies at sea on the voyage from Poland, she is unmoored and adrift as the ship arrives in New York in 1899.

Ahmad is a jinni, a being of fire, born in the ancient Syrian desert. Trapped in an old copper flask by a Bedouin wizard centuries ago, he is released accidentally by a tinsmith in a Lower Manhattan shop. Though he is no longer imprisoned, Ahmad is not entirely free – an unbreakable band of iron binds him to the physical world.

The Golem and the Jinni is their magical, unforgettable story; unlikely friends whose tenuous attachment challenges their opposing natures – until the night a terrifying incident drives them back into their separate worlds. But a powerful threat will soon bring Chava and Ahmad together again, challenging their existence and forcing them to make a fateful choice.

The Golem and the Jinni is so many different things, all at the same time. It’s been called magical realism, but that’s one of those terms that you have to define before you even begin.

It’s main characters are two beings that most people would say are creatures of myth and legend, but who find themselves in the midst of New York City in 1899.

I’m sure there’s an allegory, or any number of them, in that the story centers around the immigrant neighborhoods of the time, and that one creature is from Jewish legend, while the other was born out of stories of the Arabian Desert.

There is an opposites attract element, as Chava the golem was built out of clay, while Ahmad the Jinni is a fire spirit. Although I say “opposites attracting” this isn’t a romantic story, except in the broader definition of “Romance” as “Adventure”. Chava and Ahmad have adventures that inevitably lead them towards each other; because only they can understand what it feels like to be so completely different from everyone around them.

And that also reflects the immigrant experience.

What is felt strongly in this tale is both journeys of self-discovery. Chava starts out as a blank slate; she was created with certain characteristics, but has to learn how to be her own person. Even though she can’t change her essential nature, she still does change. The curiosity she was made with give her the ability to grow, even as she is forced to hide her essential nature.

Ahmad is let out of his bottle, just like the jinn of the stories. He has no memory of how he got to New York, the centuries he has spent imprisoned, or even how he was captured. But he knows who he is, or who he was. Even though he is out of the bottle, he is still forced to remain in human form by the original curse. So Ahmad also has to discover how to be what he is now, and let go at least some of his bitterness that he is no longer all he used to be.

Each of them has a mentor, a guide to the immigrant community they find themselves in, a person who also knows their secret.

Ahmad has to learn that his actions have consequences. Chava was born afraid of the consequences if she ever loses control of her actions.

They both believe that their meeting is chance. They’re wrong. Fate is directing both of them toward the fulfillment of an ancient curse.

Escape Rating B+: The evocation of New York City at the height of the melting pot is a big part of what makes this story special. You can feel the rhythm of the city, and the way that Chava and Ahmad fit into their respective ethnic enclaves conveys both the universality of their experience, and the seemingly subtle but often impossible to traverse cultural divides between the various immigrant communities.

They are each avatars of their people’s respective mythologies, and yet they have more in common with each other than with the groups that created them.

Chava tries her best to fit in, Ahmad barely gives lip service to the idea that he should. She is restrained, he is self-indulgent. Their respective stories of learning and adaptation bring the city alive.

But we needed a villain in order to bring the story to crisis and close. The insinuation of that villain, and the way his quest tied up all the loose ends, stole a bit of the magic. While Chava and Ahmad seem meant for each other because of their mutual otherness, discovering that it was literally true subtracted rather than added to the tale. But so much of the story is just fantastic, that I was glad to see these two reach beyond their mythical and mystical past to find a future together.

3 thoughts on “Review: The Golem and the Jinni by Helene Wecker”